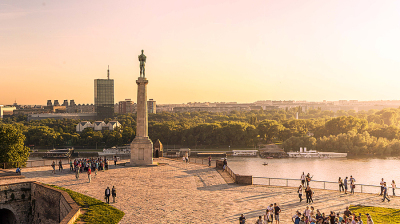 Belgrade: Many believe there will be no lockdown
By Eldar Dizdarevic in Sarajevo March 3, 2021

The Serbian government is facing a stark choice as health experts call for a new lockdown to halt a surge in coronavirus infections, but opponents of tighter restrictions have already threatened to come out on the streets in protest if a new lockdown is imposed.

Last summer thousands of people joined mass anti-lockdown protests that were joined by large numbers of far-right activists and erupted into violence and an attempt to storm the parliament.

This makes tightening restrictions again a difficult choice for the government. On a visit to the Bosnian capital Sarajevo Serbian President Aleksandar Vucic sought to reassure the population, saying: “I don't believe we are close to [introducing] a state of emergency.“

However, health experts are warning that action needs to be taken, as in recent days, the number of new daily infections has been growing rapidly, with over 4,000 new cases reported daily. A government statement on March 3 said that the number of people in hospital with the virus continues to grow, with  4,072 people currently hospitalised including 161 on ventilators.

Experts have therefore urged the government to introduce a state of emergency and a strict lockdown to halt a surge in coronavirus infections that they say threaten the health care system, reported ABC News on March 3.

Chief epidemiologist Predrag Kon of the government-appointed coronavirus crisis team told the state RTS television network that there is “no alternative” to ordering a lockdown.

Previously, Zoran Gojkovic, a member of the COVID-19 crisis response team, said that medical experts on the term had proposed the introduction of curfew. He talked of a circuit breaker lockdown lasting 7-10 days to prevent all contacts as far as possible.

The increase in cases is despite the mass vaccination programme in which almost 1mn people have received the first vaccine so far. That vaccination rate has made Serbia, a country that is not a member of the European Union, one of the best in Europe when it comes to delivering vaccines to its citizens.

Serbia has also supplied vaccines to its neighbours, with Vucic making high-profile visits to personally deliver vaccines to North Macedonia and most recently Sarajevo. As well as securing supplies of several vaccines from multiple sources, Serbia is working towards setting up production of the Russian Sputnik V vaccine to supply its own population and those of neighbouring countries.

However, vaccine scepticism remains strong in Serbia as elsewhere in the region. Many in Serbia think that vaccination is the reason for the increase in the number of infected people. Numerous citizens of Serbia have reported on their Facebook profiles about relatives and friends who received the vaccine and ended up in hospital with severe pneumonia after a few days.

Experts, meanwhile, have blamed the recent surge of infections on private parties and nightclubs flouting anti-virus rules as well as on ski resorts that stayed open throughout the winter.

The easing of restrictions, resulting in life more or less returning to normal, followed by a new wave of the virus echoes the pattern seen in late spring and early summer 2020.

Last summer’s protests broke out started on July 7 as a revolt against the government’s handling of the coronavirus crisis and decision to hold elections during the pandemic. They were triggered by Vucic’s announcement earlier the same day that a new weekend curfew would be imposed on July 10-13 — only a couple of months after the strict spring lockdown was lifted to allow the general election to go ahead in June. The rapid easing of the lockdown was seen as responsible for the second wave of the virus and heavy pressure on the health system over the summer.