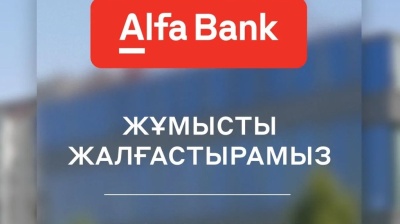 Still working? Nope: Alfa-Bank will be rebranded as CenterCredit after the takeover is completed.
By Almaz Kumenov for Eurasianet April 21, 2022

The Kazakhstan-based subsidiary of a Russian lender targeted by international sanctions triggered by the war in Ukraine is set to be taken over by local peer CenterCredit.

The acquisition is highlighting how Russian-linked banks across Central Asia, as well as the customers of those institutions, are falling prey to the severity of Moscow’s self-induced isolation.

Under the agreement announced on April 21, CenterCredit will acquire a 100% stake in Alfa-Bank Kazakhstan.

“After the legal completion of the transaction, CenterCredit will rebrand [Alfa-Bank]. Thus, it will be a fully Kazakh bank providing a full range of banking services for individuals and legal entities,” Alfa-Bank Kazakhstan said in a statement.

Although the full range of sanctions being levelled at Alfa-Bank were not due to come into force until May 6, it was already showing signs of distress. Immediately after the sanctions were announced, customers began withdrawing their savings en masse. The rush was so great that the bank was forced to impose a 200,000 tenge ($450) daily withdrawal ceiling to ensure it had enough hard cash to go around.

Another affiliate of a Russian government-owned bank, Sberbank Kazakhstan, whose sanctions kick in from July 12, appears to have weathered the test a little better. Kazakhstan’s financial regulator said last week that the bank was "generally demonstrating financial stability and fulfilling its obligations to customers in a timely manner.”

Sberbank Kazakhstan was helped in particular by managing to offload a 440 billion tenge chunk of its loan portfolio, which included such areas as subsidised car loans, mortgages and business loans, to another local lender, Halyk Bank.

But the bank is nevertheless looking to exit the country. Moscow-based consulting company Frank RG reported on April 15 that Sberbank was seeking a buyer for its Kazakhstani subsidiary, and that Kazakh-listed investment company Freedom Finance could be a possible bidder.

VTB, Russian’s second largest state-owned bank after Sberbank, intends to continue operating in Kazakhstan despite the sanctions, Frank RG also claimed, citing a source close to the supervisory board of the holding company that owns the bank.

“The option to just leave everything as it is in Kazakhstan could work, because somebody needs to service Russian clients. Trade with Russia is only set to grow,” the unnamed source was cited as having said.

Sanctions-related complications are occurring elsewhere in the region.

In Uzbekistan, the government late last month reportedly instructed privately owned banks to warn their retail and business clients about the risks of exposure to Russian banks targeted by sanctions.

At least one lender had taken the initiative earlier. On March 3, KDB Bank informed its customers that it was no longer effecting transfers with numerous Russian and Belarusian banks. By the start of this month, the number of institutions blacklisted by KDB Bank had grown to 53.

Last week, another Uzbek bank, Ipak Yuli, jumped on the bandwagon to announce that it was suspending international payments in almost all currencies to the accounts of 20 banks and their foreign branches. The list included Sberbank, VTB Bank, Promsvyazbank, Tinkoff Bank, Rosgosstrakh Bank and several other Russian lenders. This ban does not extend, however, to transfers made in Russian rubles.