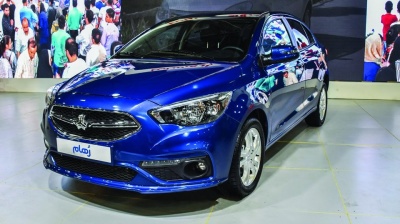 The Shahin has been spotted undergoing test runs outside Tehran.
By bne IntelIiNews May 5, 2020

The automaker, meanwhile, has also announced that it is set to re-list on the Tehran Stock Exchange (TSE), which has seen immense gains in recent weeks. SAIPA said on its website on May 3 that it had begun a process of recapitalising and that once it met requirements “it would reopen the SAIPA symbol” on the stock market.

The Shahin sedan (which previously went by the name “Roham”) was initially showcased in 2018. It is the latest model to be developed by the company (full name, Société Anonyme Iranienne de Production des Automobiles), which was again working with France’s Citroen on the assembly and development of automobiles until the reimposition of heavy sanctions on Iran by the US in 2018 caused that arrangement to end.

Asbe Bokhar quoted a source at SAIPA as saying that “15 units [of the new sedan] will roll off the production line this week as part of an initial run” before a ramping up of production in coming weeks.

The four-door sedan comes with a four-cylinder 1.6-litre engine with generates 113Hp and 154 Nm. It is fitted with either a 6-gear automatic or 5-gear manual transmission. The vehicle will be offered in six different variants, SAIPA has previously said and will replace the second-generation Kia Cerato previously assembled in Iran under licence.

The Shahin is the first vehicle from the company to be built on a new mega-platform called the SP100, set to be the basis of several sedans, hatchbacks and crossover models.

Production has been moved from testing facilities to Saipa Tiba’s production line, another sign that the company is preparing for mass production of the vehicle.

Presales of the vehicle—with presales a usual form of sales for Iranian auto companies—are likely to begin in coming weeks, the magazine report added.

The car has been spotted on motorways undergoing testing around its primary facility outside Tehran with transfer plates.

Backed by the SP100 platform, SAIPA is now considering pursuing a greater presence in the Eurasian markets of the Commonwealth of Independent States (CIS), as the car meets Euro5 emissions standards and possibly EuroNCAP crash test standards.

The manufacturer has a presence in regional countries including Azerbaijan, Iraq and Syria with its low-cost vehicles including the now 30-year-old Kia Pride model initially made under licence from the Korean brand.

The company has not yet announced the price of the vehicle; however, previous estimates placed its at $8,000 for the basic model.