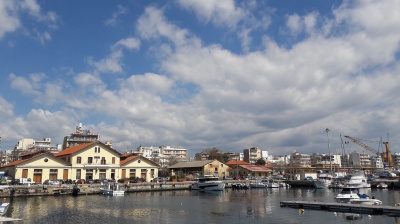 Nato military equipment has been sent through the port to Bulgaria, Poland and Romania. The port is also important because it allows the US to monitor activities in the Black Sea. / Texniths
By Matt Bernardini in Prague May 13, 2022

Dimitris Copelouzos, a Greek businessman with close ties to Russia’s Gazprom, is seeking to purchase a controlling stake in a port that has become a hub for US and Nato military operations in Eastern Europe.

Copelouzos’s Cameron SA, in a consortium with Bollore Africa Logistics and Gold Air Cargo, is one of the two leading contenders for control of at least a 67 percent stake in the Port of Alexandroupolis, close to the Greek border with Turkey. The other leading contender is an American consortium of Texas-based Quintana-ID and Washington DC-based Proxenos International. The other two interested parties are International Port Investments Alexandroupolis and Thessaloniki Port Authority.

The port’s privatisation comes at a time when it has assumed greater strategic importance for the US military. In December during a speech at the port, the US Ambassador to Greece, Geoffrey Pyatt, emphasised the port’s significance.

“The ever-growing volume of military activity here at the Port of Alexandroupoli underscores this location’s expanding strategic role and importance for Greece, for the United States and for the wider region,” Pyatt said.

Greece’s Kathimerini daily has reported that military equipment has been sent through the port to Bulgaria, Poland and Romania. According to a person familiar with the bidding process, the port is also important because it allows the US to monitor activities in the Black Sea.

In an interview with the Greek television channel Antenna in December, Kremlin spokesman Dmitry Peskov criticised the way military equipment was being sent through the port.

“The sticky part is very simple," Peskov said during the interview. "You’ve got more and more Nato soldiers, American soldiers on your territory. You transfer hundreds and thousands of military equipment units through Alexandroupolis and so on and so forth. You’re opening new facilities for Nato. At the same time, Nato is naming us an enemy and Nato is formulating the main objective of the alliance and the main objective is to deter Russia. So, this makes us nervous, you have to understand us.”

The US Embassy in Athens declined to comment on the bidding process.

The Copelouzos Group, which Dimitris Copelouzos founded in 1973, has long had close ties to Gazprom. In 1991 the Copelouzos Group entered into a joint partnership with Gazprom called Prometheus Gas, which imports Russian gas to Greece and resells it to other Balkan countries.

The US government (USG) has long had concerns about the Copelouzos Group. Wikileaks posted a leaked cable from 2007 with the title “Dimitrios Copelouzos and the Copelouzos Group: Gazprom By Any Other Name?” The cable, which was written by the former US Ambassador to Greece, Charles Pies, claimed that there was “growing concern over Copelouzos' activity that serves Russian interests and jeopardises USG's efforts to promote diversification of supply to the energy market of Greece and the surrounding region”.

If the Copelouzos Group’s bid for the port were successful, it would add to its already large portfolio of infrastructure investments. The group is the only private shareholder of Athens International Airport and manages 14 regional Greek airports as well as some real estate assets.

Representatives for the Copelouzos Group did not respond to a request for comment.

Dimitris Copelouzos is not the only Russian-linked businessman that is seeking to acquire the port. Ivan Savvidis, a Russian-Greek billionaire and former member of the Russian parliament, holds a controlling stake in one of the other interested parties, the Thessaloniki Port Authority. Savvidis acquired a 67-percent stake in the Thessaloniki port last year.

In 2018, Savvidis was claimed to be funding politicians in Macedonia who opposed the country’s name change, according to the Organized Crime and Corruption Reporting Project. Last month, The Federal National and Cultural Autonomy of Greeks of Russia, an organisation headed by Savvidis, sent vehicles and generators to the sanctioned Donetsk separatists in Eastern Ukraine. Savvidis did not respond to a request for comment.

The port’s privatization coincides with the construction of a new liquefied natural gas (LNG) terminal in Alexandroupolis, which will help Bulgaria, North Macedonia and Serbia diversify from Russian gas. This will be the second LNG terminal in Greece and could make the nation a major gas supplier for the Balkans region. The LNG has been declared a project of special interest for natural gas by the European Union.

Bids for the Port of Alexandroupolis stake must be submitted by Q2 of this year, although the exact date is unknown, according to Roi Haikou, corporate communications manager for the Hellenic Republic Asset Development Fund.