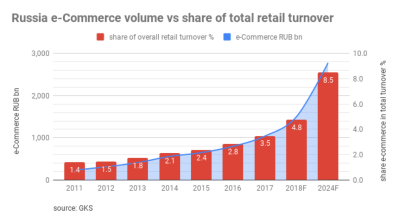 The app allows users to compare prices and assortments on a store level, form a basket, and get 1% cashback if a transaction is conducted, VTB Capital (VTBC) said in a note.

Online retail is growing in leaps and bounds even if traditional retail is in the doldrums on the back of six years of real income wage increase stagnation. Total retail turnover in Russia reached RUB2,689bn ($42.7bn) in May this year, up 1.4% year-on-year. However, the share of online retail has been growing exponentially and accounted for 4.8% of total retail turnover in 2018 – a number that is expected to double in the next six years.

Yandex.Market is in the midst of reorganising its strategy after a joint venture with state-owned retail banking behemoth Sberbank appeared to blow up this month. The two companies have been working for a year to set up a retail platform that already accounts for 10% of online sales, but according to reports by The Bell the partnership is about to end in divorce. Sberbank denied the reports on June 10.

“In April 2018, Yandex and Sberbank formed a 50/50 joint venture based on Yandex.Market to create an e-commerce platform. This news comes on the back of the previously acquired Edadeal platform that allows companies to monitor promotions on the store level and now extends into general pricing and the SKU line up. Also, Yandex provides a wide comparison on pricing for non-food categories online, so extension to food seems logical to us,” Maria Kolbina, a retail analyst with VBTC said in a note.

Supercheck is a new attempt to enter the food retail segment, according to Kolbina, which is currently almost entirely offline and offers a total turnover of RUB15 trillion.

“We believe that the app’s rollout will build Yandex.Market’s expertise in terms of client assortment preferences and the pricing policies of chains – as well as ultimately forming a competitive customer value proposition itself that could be enhanced in specific regions,” said Kolbina.

“Furthermore, such an offer could be strongly integrated with Yandex’s unmatched digital capabilities in Russia for areas of tailored promos and sales, as the company holds vast amounts of data on client preferences, daily routines and locations. In the longer-term, Yandex.Market could use those processes to create its own logistic infrastructure and become a direct competitor to food retail chains, in our view,” Kolbina added.

Online retail is already eating into traditional retail with all of Moscow’s malls seeing foot traffic fall to their lowest levels in the last five years and stay there in the last two years, according to the Watcom Shopping index, a real time measure of the number of people in the capital's top shopping venues.

Chains can leverage the Yandex.Market app to gain incremental traffic from online, as well as better promote their existing propositions, clustering those for each location, Kolbina believes.

But the online retailing space is become increasingly competitive as the traditional retailers also roll out online options for their customers – but probably not fast enough, say analysts.

“We believe that traditional retailers are overlooking digital instruments and do not efficiently integrate existing sales and promos online. Yandex.Market could therefore offer a ready solution. The rapid rollout of the app and associated services is likely to lead to stronger price competition, because of greater transparency and the need for more efficient assortment management and client knowledge,” says Kolbina.

Traditional retailers are cautiously observing the entrance of new players into the segment, particularly those with strong digital focuses and good access to capital. Competition from these new players is likely to speed up a digital transformation, say analysts, ultimately tightening rivalry but leading to better customer service and consolidation of turnover at the most efficient and modern operators.