Russia’s Embassy in Tehran has declined to comment on reports carried by Iranian state television that the Tondar “Thunder” Iranian monarchist group was plotting to attack the Russian consulate in the northern Iranian city of Rasht, RIA Novosti has reported. 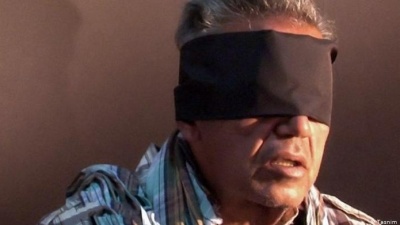 Iranian TV showed footage of a man identifying himself as Sharmahd and later the same man wearing a blindfold, saying: "They needed explosives and we provided it." (Image: Tasnim).

Thunder, officially the “Kingdom Assembly of Iran,” has sprung to prominence in recent days following the capture of the anti-Islamic Republic group’s US-based leader, Jamshid Sharmahd. Iran has stated that security forces arrested the US citizen in a “complicated operation,” but has not said how, where or when the abduction happened. Iran accuses Sharmahd of being behind the 2008 Shiraz mosque bombing which killed 14 people and wounded 215. The arrest of Sharmahd is the latest apparent abduction of several expatriate opposition group leaders from foreign locations.

"The [Russian] embassy does not comment on unverified rumours," the news agency's source was quoted as saying about the claim of a planned attack.

Iran’s intelligence ministry reportedly said that the organisation, operating from the US, was behind a number of “terrorist attacks” and planned other operations in Iran.

According to state broadcaster IRIB, "Tondar’s plans included a terrorist attack on the Russian consulate general in Rasht, however, the Iranian security services prevented these actions."

DW referred to officials as saying that Tondar had planned several  "big operations" which have failed or have been foiled by Iranian officials, including plots to blow up a dam in Shiraz, use "cyanide bombs" at a Tehran book fair, and plant a bomb at the memorial of the late Ayatollah Khomeini.

Tondar advocates the re-establishment of the monarchy in Iran that ceased to exist after the 1979 Islamic Revolution which toppled the last Shah. The organisation is said to enjoy significant support from Iranians in California.

Iranian operatives are known for using family members and tricks to lure exiles back to Iran or to Tehran-friendly countries.