Russia has “no relations with the EU”, Beijing closes ranks with Moscow 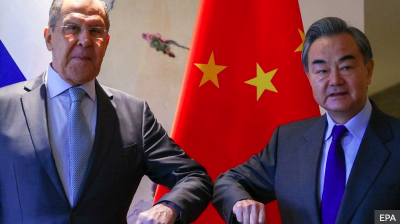 The foreign ministers of Russia and China - Sergei Lavrov (L) and Wang Yi - in Guilin / EPA
By Ben Aris in Berlin March 24, 2021

Russian Foreign Minister Sergei Lavrov said that Russia has “no relations with the European Union”, as Beijing made a public display of closing ranks with Moscow in opposition to the US sanctions policy on March 23.

Lavrov accused the EU leaders of “destroying” relations with Moscow, as relations between Russia and the EU sink to their lowest level in decades.

“There are no relations with the European Union as an organisation. The entire infrastructure of these relations has been destroyed by the unilateral decisions of Brussels,” Lavrov said during a joint press conference with his Chinese counterpart Wang Yi, as cited by Tass.

Russia and the West have clashed repeated over the sanctions policy, but Moscow significantly hardened its line in February when Lavrov laid out new rules of the game during a joint press conference with the European Union's Josep Borrell, deliberately humiliating the bloc's top foreign policy diplomat, who was on a trip to Russia, by expelling three diplomats while he was at the lectern.

Lavrov said that Russia would no longer tolerate sanctions that damage Russia’s economy and promised tit-for-tat actions should more sanctions be applied, which included breaking off diplomatic relations with Europe.

China also objects to the US sanctions policy and fears that it will be next as relations between Beijing and Washington also decay. US Secretary of State Antony Blinken named both Russia and China as major problems in his first major foreign policy speech earlier this month, calling Russia the “number one threat”, whereas China was mentioned only as a “commercial rival.”

While the row so far has been largely between Moscow, Brussels and Washington, China entered the fray on March 23 but holding a joint press conference of Lavrov and Wang to clearly show solidarity between the two powers in their opposition to the US-lead sanctions policy. The EU has recently imposed sanctions on China over its treatment of the Uighur minority and the policy of holding large numbers in concentration camp-like centres in the interior of the country.

China denies the Western charges, saying the camps are "re-education" facilities used to combat terrorism. China responded with its own sanctions on European officials the same day.

Lavrov said he and Wang had agreed that sanctions were "unacceptable" as a way to conduct international relations.

Wang said powerful countries "should not wantonly meddle in others' internal affairs according to their own standards, or use the banner of democracy and human rights to build their power".

The joint press conference represents an escalation of the showdown as China throws its weight publically behind Russia. Security analyst have worried that West’s aggressive approach to Russia has only resulted in driving Moscow into the arms of Beijing – not a natural ally – which is not in the West’s best interests.

Lavrov noted, however, that Moscow and Beijing are not uniting against anyone.

“If Europe broke off these relations – simply destroying all the mechanisms that had been built over many years – and we have only individual European countries that want to be guided by their national interests, then this probably objectively leads to the fact that our relations with China are developing faster than what is left of relations with European countries," Lavrov said during a conference in the Chinese city of Guilin.

Lavrov also held out an olive branch, saying Russia was still willing to work with Europe, but only its own terms.

“If and when the Europeans find it expedient to eliminate this anomaly in contacts with their largest neighbour, we will of course be ready to build up these relations on the basis of equality, based on the search for balanced interests," Lavrov said.

Lavrov stressed that Russia has always been focused on co-operation with its neighbours. "Our country is located geographically on the vast expanse of the Eurasian continent. We have both China, a good neighbour, and the European Union is also our neighbour. And we have always been interested in promoting our relations in all areas," he said.

Russia’s tough stance seems to have already had an effect on Brussels, which has adopted a very mild response, and there have been several calls to tone down the rhetoric and engage with Moscow in Brussels in recent weeks.

Brussels' caution is partly driven by trade concerns, as Russia remains a major supplier of energy and raw materials to Europe. Russia is also the largest consumer market in Europe and many of Europe’s top companies are heavily invested in the country. And most recently Germany and several other member states have been negotiating with Moscow on buying and producing the Sputnik V vaccine in Europe to alleviate the lack of vaccine crisis unfolding in the EU. German Chancellor Angela Merkel admitted this week that German will probably start buying and making the Sputnik V vaccine this summer.

On the same day as the joint Russian-Chinese press conference, the EU announced it was delaying its review with Russia that was due to be discussed this month.

The debate on the European Union’s new strategy in relations with Russia has been delayed until the next in-person summit, European Council President Charles Michel said on March 23.

"As regards Russia, I propose to have an information point and will share with you the outcome of my latest contacts with President Putin in advance of a more strategic debate on the matter at our next physical European Council meeting," Michel said in an invitation letter to EU leaders ahead of their video conference on March 25 and 26 as cited by Tass.

According to the EC president, the upcoming video conference will focus on tackling the third wave of the novel coronavirus (COVID-19) pandemic, which has gripped European countries.

"On COVID, our top priority is to speed up vaccination campaigns across the EU. To this end, the ongoing work to boost vaccine production, increase vaccine deliveries and ensure more transparency and predictability of supplies should be intensified," the letter reads.