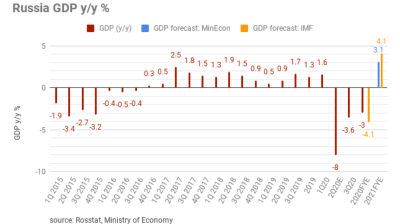 Rosstat’s second GDP estimate for 2020 points to an even shallower contraction of 3% y/y in 2020. On a quarterly basis, the recovery momentum continued into 4Q20, with GDP bouncing back from a 7.8% y/y contraction in 2Q20 / bne IntelliNews
By bne IntelliNews April 2, 2021

Russia’s economy fared much better in the last quarter of last year than expected, according to the state statistics agency's revised figures released on April 1.

While energy exports remained depressed on the back of OPEC+ supply constraints, the domestic economic rebound was acute in 3Q20 and 4Q20 in terms of household expenditures and service industry activities.

“In 2021, we expect GDP to grow 2.5% y/y. The base effects of a less severe decline in 2020 combined with an aggressive fiscal consolidation and further COVID-19 outbreaks create downside risks to our scenario. Additional fiscal stimuli via relief packages and infrastructure spending could produce upside potential to our FY21 forecast,” Sova Capital said.

Rosstat released its second GDP estimate for 2020 on April 1. While the first estimate lacked quarterly distribution, the second estimate provided a breakdown by quarterly production and expenditures.

Overall, the estimate was revised upwards by 0.1ppts from a contraction of 3.1% y/y to 3% y/y, which was not broadly anticipated by the Bloomberg consensus, and the 4Q20 estimate was better than expected (-1.8% y/y vs. consensus expectations of -2.2% y/y).

On the production side, the largest impact came from lower demand for energy and the lockdowns, which the contraction in the mining and quarrying industry (-9.5% y/y) reflected, contributing 0.8ppts to the overall decline. Services activities also saw drops, e.g. accommodation and food services (-24.5% y/y), entertainment and recreation (-11.4% y/y) and transportation (-10.6% y/y). The support came from financial and insurance services (+7.3% y/y) and real estate (+1.2% y/y), as well as public administration, defence and social security (+2.3% y/y). On a quarterly basis, almost all sectors exhibited recovery dynamics after 2Q20, especially those related to services as well as manufacturing (-7.2% y/y in 2Q20 vs. +2% y/y in 4Q20). The mining and quarrying sector remained under pressure in 4Q20 on the back of subdued output.

“COVID-19 affected Russia’s economy less than expected for several reasons. First, Russia’s small share of SMEs (compared to the substantial percentage of large and public companies) weathered the contraction, smoothing the shock to unemployment and salaries (disposable income fell 3.5% y/y, but wages were up 2.4% y/y in 2020). Second, targeted fiscal support and CBR's accommodative monetary policy contributed to the less severe decline. Third, Russia is largely insulated from global supply chains, which facilitated the rebound in Russia's net exports in 4Q20 (thanks to metals and other non-energy commodities),” Sova Capital said in a note.

“In 2021, we expect GDP to grow 2.5% y/y vs. [the] Bloomberg consensus of 3% y/y. The base effects of a less severe decline in 2020, combined with an aggressive fiscal consolidation and additional waves of COVID-19 if herd immunity is not reached due to the slow pace of vaccinations, could lead to downside risks to our 2021 GDP forecast. We expect the economy to return to positive y/y growth rates starting in 2Q21. The upsides to our forecast could arise from additional public outlays on households and businesses, as well as via NWF funds that are above the threshold (7% of GDP). In March, President Putin requested the facilitation of the process, and 0.5% of GDP could be invested in infrastructure already this year, in our view, with another 2% of GDP available next year, on our estimates,” Sova Capita added.