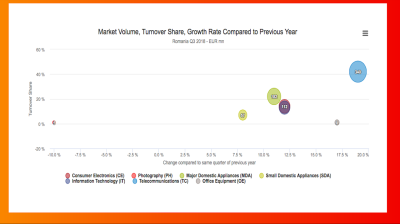 Romania’s technical consumer goods (TCG) market rose by 14% y/y in value terms in Q3 2018 to €814mn, but the annual growth rate for the ytd (January-September) period was a 17% expansion to €2.23bn, according to the latest GfK Temax Romania report.

The TCG market slowed down in Q3, but the slowdown was nothing like the more significant pattern of the overall retail sales that hit the weakest performance in five years in Q3.

The drivers of the growth in Q3 were the telecommunications segment, the largest sector by value (+19% y/y), and the office equipment segment (+17%). In contrast, the photo equipment segment continued to decrease, by almost 10% y/y in Q3. The consumer electronic (CE) sector increased by 11,7%. Major domestic appliances (MDA) grew by 11% and small domestic appliances (SDA) by 8%.

Overall,  Romania’s retail sales index increased by only 3.0% y/y (at comparable prices) in Q3, according to bne IntelliNews calculations based on data released by the statistics office. It was the weakest performance in five years and the outlook remains grim amid the economic slowdown, rising interest rates and no room left for further fiscal stimulus (rather the contrary).

Romania’s retail sales had soared over the past year amid a combination of rising wages and VAT rate cuts. The government significantly increased wages in the public sector, while the higher minimum statutory wage prompted a similar move in the private sector with the outcome of a robust advance of households’ incomes. The low interest rates until last autumn contributed to consumer exuberance as well.