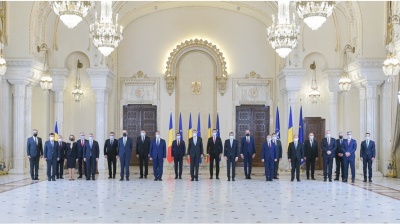 Romania’s parliament voted in the new government led by Nicolae Ciuca on November 25 , putting an end to an almost three-month-long political crisis in the country.

The new executive, backed by the National Liberal Party (PNL), the Social Democratic Party (PSD) and the Democratic Alliance of Hungarians in Romania (UDMR), got 318 votes in favour and 126 against. It needed at least 234 votes to be approved.

The robust majority among lawmakers does not guarantee the smooth functioning of the awkward coalition formed by the Liberals with the Social Democrats, which disappointed the voters of the former and prompted a deep split among the Liberals.

Liberal leader Florin Citu did not attend the parliament debates prior to the vote on November 25, but arrived in time to cast his vote. After his failure to get another term, the Liberal leader came under severe criticism even from his past supporters.

The MPs of reformist Union Save Romania USR and radical Alliance for the Union of Romanians (AUR) voted against the new government.

Nicolae Ciuca’s government was installed later the same day, in a ceremony held at the Cotroceni Palace.

A retired general, Ciuca was previously the chief of general staff, appointed by President Klaus Iohannis in 2015. He also served as head of the Romanian Land Forces. He served as interim prime minister in 2020, after Ludovic Orban resigned from the job.

Under the agreement between the PNL, PSD and UDMR, Ciuca will step down in July 2023 to let the Social Democrats’ representative take over as prime minister.

Cabinet posts have been shared out between the ruling parties, with the Social Democrats holding nine ministries, one more than the Liberals, while the ethnic Hungarians are assigned three ministries.

The formation of the new government ends a long political crisis that started when USR withdrew its support from the former PNL-led government headed by Citu. It came amid a severe fourth wave of the pandemic that overwhelmed hospitals in the country.

Speaking in the parliament, Ciuca acknowledged that “there were people who were surprised by the joining of the parties that make up the governing coalition today”.

“We, who are before you today to ask for your vote of confidence, have gone over those things that separate us and we have found the things that unite us,” he said.

“The pandemic has taught us one thing, that time is precious. We are determined to carry out this [governing] programme and put an end to the tense situation that our country is going through.”

“The political crisis is over, but the other crises have not disappeared,” said Iohannis when the government was sworn in. “The pandemic is not over. The energy crisis is not over, it is only taking on new forms. This year's budget will have to be rectified, next year's budget will have to be prepared and voted on. People are waiting for the payment of salaries and pensions on time and many other things are urgently needed. All this requires a solid government, with a consistent majority in parliament, and now there is this government.”

Romania’s consumer prices resume growth in December
bneGREEN: Institutional Investors Group on Climate Change urges EU to keep gas out of green taxonomy
Net wage in Romania moves up in November to catch up with inflation