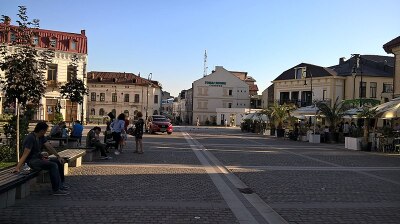 ClusterPower plans to build a €36mn data centre in southern Romania near the city of Craiova (pictured).
By Iulian Ernst in Bucharest June 11, 2021

ClusterPower, a company founded and owned by three Romanian entrepreneurs, will build the largest data centre in Romania and one of the largest in Europe in the southern part of the country near Craiova, according to Economica.net.

ClusterPower says it will create one-stop-shop Artificial Intelligence (AI) infrastructure, following an initial investment of RON172mn (€36mn), of which RON82mn was provided under state aid granted last year by the Ministry of Finance.

The rest of the money is covered by the company's own funds and other sources of financing, the company announced.

With a high-performance computing infrastructure, the ClusterPower project will be the first hyperscale data centre in the region and will create the context for stimulating the region's economic growth, allowing the hosting and development of state-of-the-art digital solutions with high added value.

“Our project is the first large data centre in Romania and the first hyperscale in Southeast Europe, and through this we will increase Romania's competitiveness in the global IT infrastructure, thus consolidating the image established by top IT experts. What we offer to our customers, beyond a centre of excellence for artificial intelligence, is trust, data security and disaster resilience,” said Vladimir Ester, CTO of ClusterPower.

In total, the campus near Craiova will host five data centres and will be powered by electricity produced by a natural gas plant that ClusterPower will build on the same site. The plant will have an installed capacity of up to 200 MW and will transform the data centre into one of the most energy-efficient globally, thanks to the trigeneration system that involves the production of electricity, heat and coolant.

ClusterPower will be one of the few data centres in the world with a direct connection to the highest level of electrical voltage (Transelectrica), as well as to the highest level of natural gas pressure (Transgaz), which ensures its energy independence and allows low operating costs, high operational safety and flexibility in meeting future growth requirements. As a safety measure, the centre will also be connected to the national electricity transmission network, as a guarantee of the project's resilience to possible disasters.

In late May Russian insuretech leader BestDoctor closed a $26mn round with an impressive investor consortium. The money was brought in by Winter Capital, a Moscow-based international fund backed, in particular, by billionaire Vladimir Potanin

Safetech plans to target the UK and US markets after fundraising.