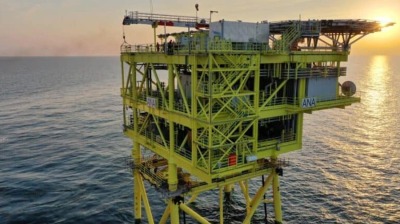 Midia is the first new offshore gas development in Romania in more than three decades. / BSOG
By Iulian Ernst in Bucharest June 29, 2022

Black Sea Oil and Gas (BSOG) is extracting natural gas at a rate of 3mn cubic metres per day — the equivalent of 1bn cubic metres per year — from the Midia Gas Development (MGD) perimeter in Romania’s offshore, the company’s CEO Mark Beacom announced.

This is the first new offshore gas development in Romania in more than three decades. The new gas from the Black Sea, delivered by BSOG, will help the country reach a self-sufficiency rate of 90%, Minister of Energy Virgil Popescu commented.

As reported earlier in June, when Romania received the first quantities of gas from the field, Midia is expected to cover around 10% of Romania’s gas consumption.

However, BSOG hasn’t abandoned the arbitration process initiated earlier this year, even if Romania amended the Offshore Law. The company objects to the supplementary (windfall) tax on the revenues generated by the sale of the gas over a certain threshold, a provision of the Romanian legislation that was not completely eliminated by the so-called offshore law earlier this year.

The tax on windfall revenues was revised, Beacom admitted, but not enough.

“We filed for an arbitration. We will decide whether to continue, for the time being, the process is going on. We are evaluating [the revised Offshore law]," he stated.

In February 2019, BSOG, a company controlled by the US investment fund Carlyle, announced the final investment decision for the Midia Gas Development project, where it said it would invest $400mn.

The final investment decision was taken in good faith, based on assumptions that BSOG and its partners will be able to restore all their rights, in the sense of eliminating any additional taxes and contributions, as well as any restrictions on free trade of their gas on a fully liberalised market, according to European legislation, the company announced at that time.

The Offshore Law was amended this year, but the tax on windfall revenues was maintained — even though the terms were sweetened in favour of the investors.

OMV Petrom, which operates another significant offshore perimeter in Romania’s Black Sea,  has not decided yet whether the revised Offshore Law is supportive of the investment in the production stage.