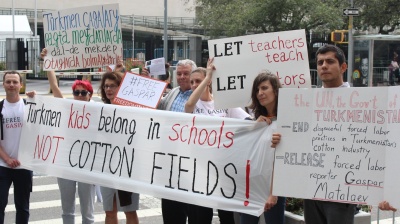 The great strides Uzbekistan took over just a few years to eliminate systemic forced and child labour in its cotton industry are by now widely acknowledged, but the same cannot, unfortunately, be said of its remote neighbour to the south Turkmenistan.

In fact, the US and European governments were this week urged to impose import restrictions on cotton products from Turkmenistan following the release of a new report, prepared by Turkmen.News and the Turkmen Initiative for Human Rights and published by the international Cotton Campaign. The report confirms the continued prevalence of forced labour in the Turkmen cotton industry, as ascertained during the 2021 harvest.

Despite existing bans—for example, in 2018, cotton and textiles produced in Turkmenistan were prohibited for export into the US—Turkmen cotton still finds its way to the European and American markets. On July 19, Sourcing Journal described how a search on the websites of Kmart and Overstock.com on July 18 turned up hand and bath towels billed as containing “​​100% cotton imported from Turkmenistan.” Several listings on eBay market “Turkmen linens”, it added.

Given the unsatisfactory situation, human rights activists are calling on companies to sign the Turkmen Cotton Pledge, excluding the use of raw material from Turkmenistan. To date, 140 global brands have joined the commitment.

The report says the system of forced labour in the cotton fields in Turkmenistan is sponsored by the central government.

The government is also said to use forced labour as it mobilises adults and children for public works projects, and it has failed to investigate or prosecute anyone for complicity in the resultant crimes, the report claimed.

“The government-organised system of forced labour in Turkmenistan is having a negative impact on the Turkmen people, who are already facing a deep economic crisis,” Ruslan Myatiev, head of Turkmen.News, said. “Child labour is a direct result of government policy. Children are often sent to the fields as replacements for government employees or to help their families.”

“The Turkmen government has full control over the cotton production system, which relies on the exploitation of farmers and forced labour of Turkmen citizens,” said Farid Tukhbatullin, chairman of the Turkmen Initiative for Human Rights. “Anyone who tries to speak out runs the risk of being harassed and losing their jobs because there are no independent institutions or mechanisms that can protect people from reprisals.”

For 2022, and for the seventh time in a row, Turkmenistan has been listed in the US State Department’s Trafficking in Persons annual report in the third category of countries along with Afghanistan, Iran, Cambodia, China, Vietnam, Venezuela and other states that are unfavourable in terms of forced labour.

“No legislative instrument on its own will solve this issue,” said Rocio Domingo Ramos, business and human rights policy and research officer at Anti-Slavery International, another Cotton Campaign member. “There’s no silver bullet here. What we need is a smart mix of different measures tackling the root causes of this system."

Turkmenistan: Come fly with me

CENTRAL ASIA BLOG: Why Tajikistan and Turkmenistan said no to a Central Asian ‘Visegrad Group’

Turkmenistan: Come fly with me
COMMENT: As geopolitical tectonic plates shift, Central Asia's getting nowhere fast on unity
CENTRAL ASIA BLOG: Why Tajikistan and Turkmenistan said no to a Central Asian ‘Visegrad Group’