Putin's May Decrees and the 12 "national projects" take shape, but lacunae remain 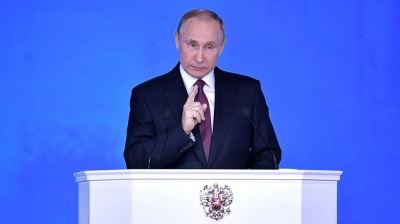 Putin set out a comprehensive plan to transform Russia with his May Decrees in 2018 that contains 12 "national projects" but lacunae and questions remain
By Fabrice Deprez in Kyiv January 24, 2019

Since he was elected for a fourth term in May 2018, Russian president Vladimir Putin has tried to show he was serious about rubbish. The issue has rocked Russian politics for nearly two years now, as exasperated locals in the Moscow region started in the summer of 2017 to protest against toxic vapours emanating from nearby landfills.

In January 2019, Putin announced the creation of a national rubbish monopoly tasked with coordinating investments to modernize waste collection systems across the country. This wasn’t his first stab at the issue however: a year ago, he had already demanded the government to put together a strategy to “eliminate all unauthorized dumps” and create “an integrated system for the treatment of solid municipal waste” as part of the “May Decrees.” 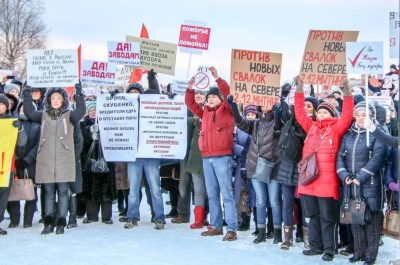 More than 25,000 protestors took to the streets in Arkhangelsk in December 2018 to demonstrate againt a smelly landfill

These decrees are a series of objectives for the next six years, and have been published since 2012, but this time they were divided into 12 “national projects” with the aim of modernizing and revitalizing the Russian economy and society. The details are still being worked out and many questions remain. Many of the “plans” are no more than bullet points and the source of funds for billions of dollars of investment remain vague in many sections.

One key point is that these national projects as they are described in the decree are not actual, specific projects. Rather, the decree sets up a list of priority sectors in which investment should be made (demography, healthcare, education, living conditions, ecology, roads, labour productivity, science, digital economy, culture, small business and international cooperation) but doesn’t specify what exactly should be done or how much money should be invested (a recap of the 12 national projects as they appear in the May decree is included at the end of this article).

The wording of the decree did show a shift in the government’s priorities, from social policies and the military in 2012 to infrastructure, healthcare and digital issues in 2018. Some national projects such as labour productivity or small businesses were not mentioned in the 2012 decrees, but the most striking difference is probably the fact that any mention of the military or the defence sector are entirely absent from the May 2018 Decree. (There’s a single exception, a reference to the military-industrial complex in the “ecology” section: “improving the quality of drinking water through the modernization of water supply systems using water treatment technologies, including technologies developed by organizations of the military-industrial complex.”)

Starting in September, ministries started publishing “passports” for each of the 12 national projects detailing the financing as well as the actual tasks (along with their completion date) for each section. It’s on this passport that the first mention of a “federal waste operator” appeared, as the idea was absent from the initial May Decree. Financing was, during the summer, a hotly negotiated topic: in late September, RBC reported that the budget for the “ecology” national project had jumped from RUB1.5 to RUB6.4 trillion, though the published version of the passport brought it down to RUB4 trillion ($60.7bn).

The publication of the passports provided much-needed details to projects which, in the May Decrees, remained exceedingly vague: the “healthcare” national project is for example one of the longest in the decree and includes ambitious targets such as decreasing infant mortality to 4.5 per 1,000 births (it is currently sitting at 6.5 – the US is at 5.7) or decreasing the mortality rate of the working population to 350 per 100,000 people (from 477 in 2017). But the tasks set out to achieve these objectives were closer to a wish list than an actual plan, with bullet points such as “introduction of innovative medical technologies,” “formation of a system to protect patients’ rights” or “development of a network of medical research centres.”

The passport, by contrast, divides the national project into eight sub-projects, giving detailed tasks for each of them as well as completion dates. The sub-section “development of the primary health care system” is divided into 35 points with specific provisions such as “replacement of 1,200 worn out healthcare centres and ambulance stations” or “construction of no less than 78 helicopter landing platforms for medical organizations.” The total budget for the healthcare national project is, according to the passport, RUB2.2 trillion ($33.4bn) to be spent between 2019 and 2024.

On a more anecdotal note, the size of these passports also give a good idea of the state’s priorities: with 90 pages, the document for the “digital economy” national project stands way above most other projects (usually between 35 and 50 pages long).

Despite these additional details, doubts persist over the feasibility of the projects as well as their relevance: head of the Audit Chamber Alexey Kudrin criticized the national projects in January, saying he “had not seen” the final version and the current projects were mostly “numbers and indicators dancing.” Kudrin also claimed the national projects would not be enough to achieve growth rates that would put Russia among the top 5 of the world’s biggest economies. For this, “institutional and structural steps” are needed, according to him. The former Finance minister has long lobbied for major structural reforms, including in sensitive areas such as an overhaul of the justice system and renewed anticorruption drive, to improve the business climate and kickstart economic growth.

A month earlier, Kudrin raised more specific concerns about the “ecology” national project, noting that “more than 80%” of the project’s financing” was based on extra-budgetary funds, while there was still no clear understanding of how the funds would be raised.

Financing will likely remain the key issue for the projects’ completion. Existing state programs are already being updated to fit with the national projects, the government announced in early January: the state program "Employment Assistance,” which was started in 2014, will, for example, be amended to include the cost of additional formation for workers close to the retirement age who face threats of dismissal, one of the provision of the “employment” national project. The Economy ministry’s “Economic Development and Innovation Economy” program will also be changed in order to deal with four national projects: “Small Businesses”, “Digital Economy”, “Demography” and “Labour Productivity”. Overall, Kommersant reports, the financing of these programs should jump from RUB871.4bn to RUB1.6 trillion ($24.3bn) to put them in line with requirements of the national projects.

Despite this, the state will be asking Russia’s big companies to make an effort too: in December, Putin called on businesses to participate in the implementation of the national projects, especially in the labour productivity sphere.