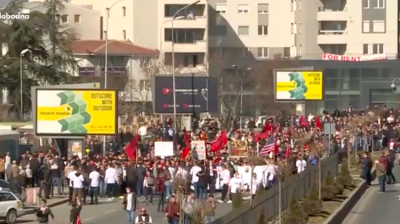 By Valentina Dimitrievska in Skopje February 28, 2021

Seven police officers were injured in protests in Skopje held by a large group of ethnic Albanians against the verdicts that put three defendants in prison for life for murdering five people near the North Macedonian capital in 2012.

The sentences were issued in the Monster (Monstrum) case, concerning the brutal killings of four young Macedonian men aged 18-21 and one fisherman near Lake Smilkovsko in 2012. The motive for the killings was never determined, although media speculated at the time they were intended to damage ethnic relations.

On February 23, Alil Demiri and Afrim and Agim Ismailovic were sentenced to life imprisonment for terrorism, while Fejzii Aziri received a prison sentence of 15 years on two counts and Haki Aziri was sentenced to nine years in prison. Explaining the verdict, the judge Ognen Stavrev stressed that the five-fold murder was not an ordinary crime, but much more than that — a monstrous sadistic killing.

Only Sami Ljuta was acquitted after the prosecutors dropped the charges against him due to the lack of evidence.

A few days after the verdict, the family members and friends of the convicts marched through the streets of the capital of Skopje toward the criminal court and then to the government, but a strong police cordon prevented them from reaching the building by closing the boulevard that leads there.

The protests turned violent when the protesters started shouting "Dictatorship" and demanding the street to the government office to be opened. There were several incidents when some of the protesters tried to approach the police cordon, but they were stopped.

Some of the protesters carried Albanian flags and shouted "Greater Albania".

These were the second verdicts in the Monster case. In the first trial, all defendants were prosecuted for terrorism and sentenced to life in prison. However, the Supreme Court returned the case for retrial to the basic court in 2017.

EU downgrades its estimate of Russian troops on Ukraine’s border to 100,000 but tensions remain high
18 minutes ago
PM scandalises Bulgarians by wearing skimpy shorts to present new government
1 hour ago
Strong hopes Georgia's political crisis is over after EU brokered agreement
8 hours ago
Bulgaria’s outgoing government under scrutiny over sudden hike in budget deficit
20 hours ago
Team Navalny pulls the trigger on the next big demonstration scheduled for April 21
1 day ago