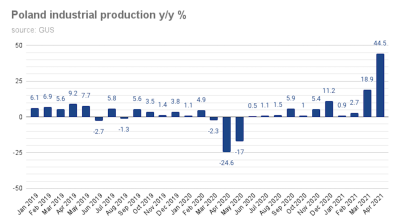 The expansion was in line with the consensus that assumes that the spike in output growth would happen against the very low base in April 2020 caused by the pandemic lockdown.

“Production of durable consumer goods is still growing the fastest, supported by the recovery of consumer demand. Production of capital goods is also gradually recovering. Exports remain an important driver of the industrial sector, as production in the export-oriented segments expanded the most,” Bank Millennium wrote in a comment on GUS figures.

Seasonally adjusted, industrial production boomed 44.7% y/y in the fourth month after an expansion of 15.7% y/y in March.

Overall, production increased in 32 out of 34 industrial segments in April in y/y terms. March saw y/y expansion in 27 segments.

The data for April show “a soft start to Q2 but this should not have come as a major surprise given the tightening of containment measures,” Capital Economics noted.

“New virus cases have fallen, the vaccine rollout has gathered pace and the government has re-opened parts of the hospitality and leisure sector, including outdoor dining and cinemas. We expect a sustained recovery in activity to take hold from May onwards, with GDP expanding by 4.3% over 2021 as a whole,” the London-based analytics company added.

Poland’s unemployment rate falls to lowest point since 1990
17 hours ago
Hungary’s jobless rate inches down to 3.5% in May
3 days ago
Polish retail sales growth eases to 8.2% y/y in May
4 days ago
Ruble rises to seven-year high, best performing currency in the world
5 days ago
Polish PPI inflation accelerates to 24.7% y/y in May
5 days ago