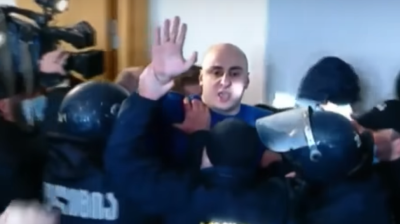 Nika Melia is led away amid scenes of chaos after police broke their way through barricades at the UNM party HQ.
By Iulian Ernst in Bucharest February 23, 2021

Law enforcement officers not long after dawn on February 23 detained Georgian opposition leader Nika Melia after storming the barricaded party offices of the United National Movement (UNM) in Tbilisi and using tear gas on supporters camped there with him.

The move came a day after Georgia’s parliament—boycotted by opposition parties since last October’s general election, which they claim was fixed in favour of the Georgian Dream party—approved a new government led by Prime Minister Irakli Garibashvili. He was appointed following the resignation on February 18 of Giorgi Gakharia, who resigned after saying that subjecting Melia to a pre-trial detention order would exacerbate divisions in the country.

In a speech after his confirmation as the new PM in an extraordinary sitting of parliament, Garibashvili firmly refused the opposition’s demand for a snap general election and, in reference to the pre-trial detention order on Melia, stated that “the law must be enforced”. He added: “We categorically refuse any negotiations on a snap election! This issue is closed! This issue is not being considered!”

The US Embassy in Tbilisi put out a statement following the detention of Melia, saying: "The United States Embassy is deeply concerned by the government's decision to detain the head of a major opposition political party at the party's headquarters this morning. We regret that the call of the United States and other international partners for restraint and dialogue was ignored. We are dismayed by the polarizing rhetoric from Georgia's leadership at a time of crisis. Force and aggression are not the solution to resolving Georgia's political differences. Today, Georgia has moved backward on its path to becoming a stronger democracy in the Euro-Atlantic family of nations."

The democratic development of Georgia was an issue now US President Joe Biden took a keen interest in over many years during his time as a senator.

"Shocked by the scenes at UNM headquarters this morning," British Ambassador to Tbilisi Mark Clayton wrote on Twitter. "Violence and chaos in Tbilisi are the last thing Georgia needs right now. I urge all sides to act with restraint, now and in the coming days."

As police raided the UNM building, some of Melia’s supporters clashed with security officers on the street. A fire ladder was brought to the scene and several law enforcement officers used it to reach the floor where Melia was. Prior to Melia's arrest, police evicted citizens in the UNM building, including leaders of other opposition parties involved in the boycotting of parliament and showing solidarity with Melia.

Tbilisi City Court issued the order for the detention of Melia on February 17, accused of inciting violence at mass protests on June 20, 2019, during events in which demonstrators attempted to storm the parliament building after a row over a Russian MP being allowed to address the chamber from the speaker’s chair.

Melia, who says the charges against him are politically motivated, has been charged with organising and using group violence in the June 20 events under Article 225, Parts 1 and 2 of the Criminal Code of Georgia. He was initially asked to post bail of Georgian lari (GEL) 30,000 by Tbilisi City Court and told he must wear an electronic monitoring tag. However, the tag was publicly removed last November 1 during a protest rally on Rustaveli Avenue.

The prosecutor's office appealed to the city court to change the measure of restraint and apply a bail of GEL100,000. The court partially granted the agency's motion, introducing a GEL70,000 bail. Melia reportedly refused to post it.

The pre-trial detention of Melia was ordered after the suspension of his immunity as an MP—a position he refused to take as part of the opposition parties’ boycotting of parliament. Melia has also been forbidden from crossing the Georgian border without prior notification and the consent of the prosecution.

COMMENT: Democracy is struggling in Georgia
Top ruling party lawmaker assesses West’s reaction to Georgia’s political crisis as “measured and soft”
COLCHIS: Georgia is in crisis, but it’s far from the end of democracy