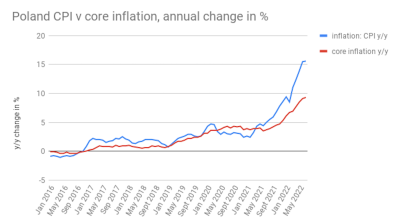 Headline inflation in Poland has been elevated for months, with CPI growth at 15.6% y/y in July, as the war in Ukraine impacted the prices of energy and fuels heavily.

The outlook for inflation assumes price growth will ease incrementally in the next few months, then shoot up early in 2023 on the back of administrative changes to taxes and energy tariffs.

After that, inflation is expected to begin a more sustained descent, analysts say.

The central bank raised its reference interest rate ten times in as many months between October and July from the all-time low of 0.1% to 6.5%.

Analysts expect that the interest rate is likely to increase to around 7.25% before the NBP hits the pause button.