Poland’s Allegro seeks valuation of up to PLN8.1bn in upcoming IPO 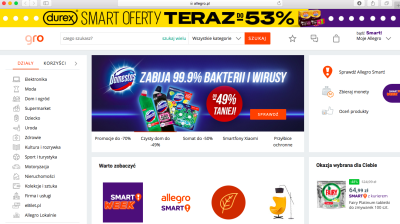 The company has set the maximum price of PLN43 (€9.59) per share for its debut on the Warsaw Stock Exchange, due on October 12. That puts Allegro’s valuation at up to PLN8.1bn, one of the biggest-ever IPOs on the Warsaw bourse.

“The public share offering of Allegro.eu comprises up to 187,826,087 ordinary shares in total with up to 5% of the final number of the offer shares allotted to retail investors,” the company said in a statement detailing the listing.

The final share price will be published on or about September 29, the company also said.

Allegro also said that its free float would be at least 18.26% of the company.

Allegro’s IPO has been expected since July, when the first speculation appeared in the news about the upcoming debut.

If all goes as planned for Allegro, the company’s stock exchange valuation could be as much as €10bn-€12bn. That would make Allegro one of the biggest on the Warsaw bourse, alongside gaming giant CD Projekt and foreign-owned Czech utility CEZ and banks Unicredit and Santander.

Allegro is owned by the private equity funds Cinven, Permira, and Mid Europa Partners, which acquired Allegro for $3.25bn in 2016 from South African owner Naspers.

Since Russia’s Yandex called off a deal to acquire online bank Tinkoff, the standout IPO of Kazakhstan’s financial technology and e-commerce leader has become the benchmark-setter.

The Economics affairs ministry wants to phase out the sale of anonymous prepaid mobile SIM cards citing their widespread use for criminal activities using "burner" phones.