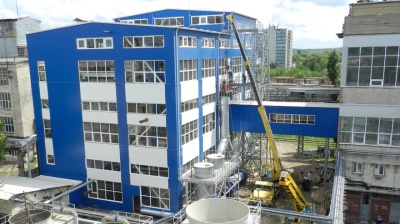 The expansion of Floarea Soarelui, the largest oil and fats factory in Moldova and a Trans-Oil company.
By Iulian Ernst in Bucharest June 23, 2019

Moldovan businessman Vaja Jhashi — a close associate of Vlad Plahotniuc, until recently the country’s most powerful politician — sold a stake of his group of companies Trans-Oil, specialised in oilseed trading and processing, to Oaktree Capital Management (OCM), Trans-Oil said in a statement.

Trans-Oil is the largest business group in Moldova, controlled by Russia-born investor Jhashi who holds Moldovan, Russian, Georgian and US citizenships.

OCT, a US investment management firm specialising in alternative investment strategies, is the largest distressed securities investor in the world.

Mold Street puts the value of the assets owned by Trans-Oil group at $240mn, out of which $220mn is owned by Jhashi. Most of the assets (grain elevators, storage capacities, the grain terminal at Giurgiulesti port on the Danube) are located in Moldova, with limited assets located in Ukraine and Switzerland.

“The new shareholder is expected to significantly increase the group’s business outreach internationally, as well as to bring the highest standards of corporate governance and effective structures that will strengthen the performance of an important regional agribusiness player,” Trans-Oil said in a statement.

“This is the first corporate investment done by a major US global asset management firm in the Republic of Moldova.” The move comes as another important step taken by the company after it launched a $300mn Eurobond in April, the group said.