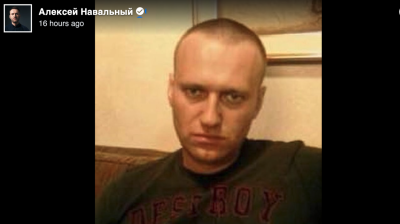 Only a third of Russians consider Navalny’s jailing as “unjust”, half approve of the decision / wiki
By bne IntelliNews April 6, 2021

Just under a third (29%) of Russians consider the jailing of anti-corruption activist and opposition politician Alexei Navalny as unjust, while half (48%) approve of the decision, according to independent pollster the Levada Center during a survey conducted between March 25-31. Another 23% couldn't answer the question.

Despite the international outcry at Navalny's jailing, the Russians themselves are largely indifferent to his fate. Another poll found that half of respondents had no strong opinion over his jailing and the remaining half were evenly divided between supporting him and disapproving of him. Russian President Vladimir Putin’s popularity has been largely unaffected by the affair, with his personal popularity rating falling briefly by one percentage point before recovering to 65% within a month.

Since he started his jail sentence Navalny has complained of back problems and a pain in his leg. While Team Navalny initially claimed that he had been denied medical treatment, it has since transpired that the prison authorities took Navalny to a hospital in the nearby city of Vladimir where he was given an MRT scan and offered medical treatment, which he refused, demanding he be treated by his own doctor.

More recently over the weekend Navalny reported that he had a temperature of 38.1C and a strong cough. He claimed that his cellmates were suffering from TB. Izvestia reported that he has been transferred to the prison hopsital where he is being treated. The prison officials said: "All the necessary tests have been done, including for COVID. He is under observation. The prison is being disinfected and ventilated."

Navalny mocked reports on his "model prison" and once again called for his peronal doctor. "You can trust prison doctors as much as state TV," he said in comments relayed by his representatives.

Even more controversially, RT sent Maria Butina to interview him in jail and report on his conditions. Butina was last year arrested on espionage charges in the US where she was advocating for gun rights, before being accused of spying and deported.

Ironically, while she was under arrest Navalny called for her to be released and threw his support behind Butina while she was in jail.

During the interview in jail Butina and Navalny had a heated exchange, with Butina claiming that the conditions in Navalny’s barracks were “better than many regional hotels.”

Maria Butina spent 18 months in an American prison after admitting to working as an unregistered foreign agent. She has been working at RT as a correspondent since returning from the US in 2019.

“Navalny chastised her for 15 minutes in front of a line of prisoners, calling her a parasite and a servant of a regime of thieves,” his Telegram channel said.

CCTV footage released by the prison at the same time showed Navalny walking and apparently unaffected by either back pain or problems with his leg. The whole incident caused a emotional storm of comment on social media, both pro- and anti-Navalny.

In the meantime, Team Navalny has launched a online campaign to collect 500,000 registrations for another mass demonstration and say they will announce the date once that goal is reached. While the initial response was rapid and large, after about 250,000 signed up the pace has slowed. As of April 3 a total of 383,688 people had indicated they would attend the rally should it go ahead.

Some 100,000 people attended the first rally in January following Navalny's arrest and slightly less attended the follow-up rally a week later. Team Navalny didn't call a third rally, afraid the momentum was already fading. The majority of those attending said they came as much to protest against the state’s heavy-handed tactics rather than to support Navalny per se.

Previous nationwide demonstrations this year led to more than 10,000 detentions, dozens of criminal cases against protesters and widespread claims of police violence.

Levada’s survey also showed high awareness – as well as a clear generational divide – of Navalny’s imprisonment, with younger respondents calling it unjust than their older counterparts.

Half of Levada’s respondents aged 18 to 24 said Navalny was imprisoned unjustly, compared with 19% of those aged 55 and over.

Overall, 82% of those polled said they have closely followed or heard about the anti-corruption campaigner’s incarceration.