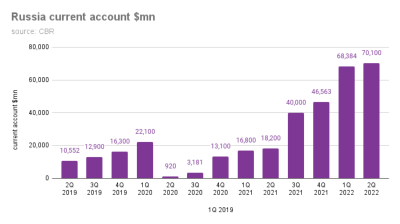 Russia is currently taking more foreign exchange than it has ever done before. The current account surplus is swelling and breaking new records every quarter. / bne IntelliNews
By bne IntelliNews July 12, 2022

The current account surplus of Russia’s balance of payments reached a record of $70bn at the end of 2Q22, according to the latest data from the Central Bank of Russia (CBR), bringing the total surplus for 1H22 to $138.5bn.

This makes the record CA surplus in 1H22 already exceed the surplus seen for the whole of 2021. In year on year terms the surplus jumped 3.5-fold and beat the last record of 1H08 2.5-fold (chart).

Despite the Western sanctions for its military invasion of Ukraine, Russia thus continues to accumulate oil and gas export-generated foreign currency, which further supports the strengthening of the isolated ruble. bne IntelliNews has analysed the fiscal risks a strong ruble carries and the development of the so-called Dutch Disease.

Russia’s exports in 2Q22 continued to be high, at $153bn being only slightly below the $166bn posted for 1Q22. At the same time, imports continued to decline, down to $72bn from $89bn in the previous quarter.

Although the data released by the CBR is now limited, Bloomberg estimated that the trade surplus in June alone doubled to about $28bn from an estimated $14bn in May.

The analysts surveyed by The Bell gave the same estimates, noting that the trends on exports expansion despite the sanctions and imports contractions due to the sanctions continued in June. However, the growth of the monetary value of exports in 2Q22 declined to 22% from 69% seen in 1Q22.

Sberbank CIB believes that ruble will continue its strengthening as a result, albeit after a recent short-lived correction, as foreign currency surplus will continue to dominate the Russian market ahead of the upcoming tax payment period that starts in mid-June.

Other analysts estimated for The Bell that the ruble is likely to remain in the RUB55 to RUB60 per US dollar range, without export moderation, recovery in domestic demand, and/or acceleration of capital outflow.

It was previously anticipated by the analysts that the CA in 2022 could reach a record $200bn-$300bn surplus, as compared with $122bn in 2021, due to collapsing imports and maintaining high oil and gas exports revenues

Russian GDP contracted by 4% y/y in the second quarter of 2022, according to RosStat (chart), consistent with a fall of 6% in seasonally adjusted q/q terms. Growth will slow in 3Q22 too, but by less, say Capital Economists.

Russia’s international reserves up $3.6bn in one week to $571bn

Russia’s gross international reserves were up by $3.6bn in a week to $571.2bn, at the same time as individuals are buying record amounts of foreign currency.