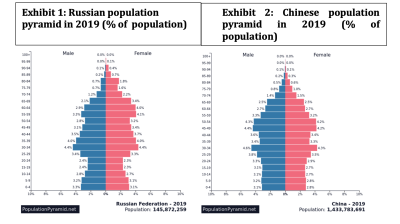 Many believe that demographics is at most remotely related to economics. If you are one of these, perhaps by the time you finish reading this article, you will be convinced how fundamentally demographics underpins economics.

Let’s start with GDP. GDP = No. of staff in workforce x productivity. So if the population of certain countries (Russia, China, etc.) is expected to decrease by 30-40% the next 30 years (which is indeed the expectation), unless there is a productivity miracle, their GDPs will constitute a smaller share of global GDP. 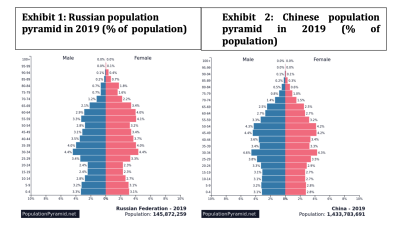 In Russia, urbanisation happened somewhat earlier than in China. People tend to have fewer children when they live in overcrowded apartments than when children provide free labour on farms. In China, the demographic implosion was accelerated by the government’s “one child” policy. Severe penalties were imposed on families with more than one child. Estimates range as high as 200mn for the number of infant girls killed so that the family could have another chance at having a son. (Note how many more males than females at the bottom of the Chinese pyramid). This inhibits family formation.

In Russia, demographic implosion is now being further accelerated by men dying in their prime in Ukraine, and massive emigration since the start of the war.

The United States enjoys much healthier demographics: baby boomers, for whatever reason, had more children than in Russia or China. 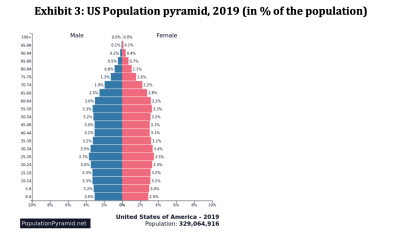 As mentioned, demographics deals not only with population numbers, but also breakdown of the population according to age cohorts. Over the next few years, a large number of baby boomers will transition from the workforce into retirement all over the world. While there is a greying population in the United States, the trend is far more pronounced in China and Russia.

Given that 25-65 year olds provide the bulk of the workforce, in the unlikely event that birth-rates could be encouraged to say double, it would take 25 years for new-borns to enter the workforce, let alone reach peak productivity. There is no instant solution. One might surmise that the relative GDPs of Russia and China are peaking at present vis-à-vis the United States.

Russia’s GDP ($1.775 trillion) is much smaller than most people realise, less than Canada’s! ($1.991 trillion, 2021 numbers). Russia packs a punch above its economic weight thanks to its stock of nuclear weapons and a strategic position with respect to commodities, most notably oil and gas. However, as Russia’s GDP declines in relative terms due to demographics, its nuclear arsenal becomes more obsolete, energy stocks become depleted and the world turns away from hydrocarbons, its influence in the world may well decline. The start of the Ukrainian War may well mark “Peak Russia.” In my opinion, it is “all downhill” from here – perhaps why Putin thinks it’s now or never that Russia must exercise its muscle – to maintain its geopolitical prominence.

With China, the situation is much more subtle, given that its population is triple that of the US, its GDP is already larger than the US on a purchasing power parity basis, and that they are so much more of a force in technology than the Russians. Yet here as well, a demographic implosion is pre-ordained and irreversible. If their population goes down by 30-40%, and the US population goes up by 15-20% by 2050, it is likely that Chinese GDP relative to the US will also shrink.

Where does Central Europe stand with respect to demographics? Unfortunately, as the following population pyramids demonstrate, they are trending an implosion as well. 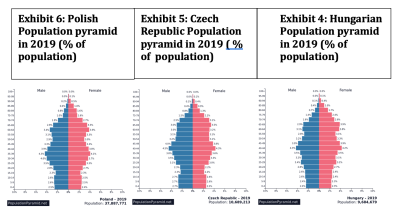 So the situation does not look that healthy for Central Europe – in fact, over the past decade or so, births have been even fewer than in Russia or China.

Until age 40-45, wage earners are primarily spending their earnings (having children, making a household, etc.), whereas after that age, the emphasis is on savings (e.g. for retirement). Once again, the former triggers consumer spending, which propels GDP growth.

Of course, one of the most significant aspects of ageing populations is the increasing ratio of elderly, who must be supported (pension, medical, etc), to workers. In Europe, for example, the ratio of pensioners to workers is expected to rise to 71% by 2060.

There is no short-term solution. If we were to change tax policies, housing availability, etc. today, in 25 years we could see the pensioner to worker ratio improve. The other solution would be to encourage everything that promotes productivity (automation, etc). For example, Japan, which is facing a major problem with an ageing population, is using digitisation to compensate for a lack of labour.

In my next article, I intend to build on this article and discuss how demographics is also fundamental to finance: performance of financial markets, cost of capital, etc.

ASH: The West is short-changing Ukraine
2 hours ago
RIDDLE: If they fear us they respect us
2 hours ago
COMMENT: Can Russia pivot its European gas sales to Asia?
3 days ago
Perspectives | Beijing and Moscow clash over Kazakhstan’s oil
3 days ago
COMMENT: Emerging European tightening cycle coming to an end
6 days ago