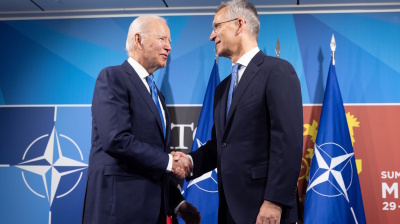 Nato leaders have agreed a ''fundamental shift in our deterrence and defence'' in response to Russia’s invasion of Ukraine, marking a return to the kind of military deployments last seen during the Cold War.

On the first day of their summit in Madrid on June 29, the security alliance’s leaders agreed a big increase in troop deployments on its Eastern Flank facing Russia, more help for Ukraine in its defence against Russian aggression, and a new Strategic Concept that explicitly names Russia as the alliance’s “most significant and direct threat”. Nato Secretary-General Jens Stoltenberg also reiterated that “Nato’s door remains open” for eventual Ukrainian accession.

“The Russian Federation’s war of aggression against Ukraine has shattered peace and gravely altered our security environment,” Stoltenberg said in his opening address. “We cannot discount the possibility of an attack against allies’ sovereignty and territorial integrity,” he added.

At the summit, Nato leaders agreed to boost the number of alliance troops at high readiness from 40,000 to 300,000. These designated forces can be used to reinforce in an emergency individual states on its Eastern Flank, a region for which it is devising a new defence plan.

“This is the first time since the Cold War that we have these kind of plans with pre-assigned forces,” said Stoltenberg.

As part of this strategy, US President Joe Biden announced a major ramping up of the US military presence in Europe “to defend every inch of allied territory”.

“In a moment where [Russia’s President Vladimir] Putin has shattered peace in Europe and attacked the very tenets of the rule-based order, the United States and our allies are stepping up,” Biden said. “The steps we’re taking during this summit are going to further augment our collective strength.”

Biden announced on June 29 that the US 5th Army Corps will establish a permanent headquarters in Poland – the first permanent Nato base there, meeting a longstanding Polish request.

"It greatly strengthens our safety and is an additional guarantee in the current very difficult situation," Poland's President Andrzej Duda said in Madrid.

The US will also send 5,000 more troops to Romania. Extra US forces are also being sent to Western Europe. Currently there are more than 100,000 US troops in Europe, up 20,000 since the invasion of Ukraine.

Britain has announced that it is to commit 1,000 troops to its existing 2,000 soldiers in Estonia, though they will be based in the UK. It will also earmark one of its new aircraft carriers for defending the Eastern Flank.

Germany will designate one brigade for the defence of Lithuania, with a permanent headquarters, and one division overall (15,000 troops) for the high-readiness forces, as well as some 65 planes and 20 ships.

However, most of these rapid reaction forces will be based in Nato home countries and members have yet to detail precisely which of their forces will be committed to Nato command.

"The plan is to have this in place by next year. I am confident that this will happen," Stoltenberg told a press conference.

Nato has also agreed to station more troops actually within the Eastern Flank states, bringing the battlegroups in each country up to brigade level (more than doubling each force to around 5,000 soldiers), though Baltic states leaders had hoped for more.

The US and other Nato states will increase the size of their rotated deployments into the Baltic states to meet fears expressed by Baltic leaders that they could be quickly overrun by a Russian invasion. They fear this would devastate their countries – just as Ukraine is currently suffering – and could cut them off from the rest of Nato, making any fight back much more difficult.

Nato will also pre-position more equipment and supplies on the Eastern Flank, bolster forward-deployed capabilities such as air defence, and strengthen command and control.

Nato’s more muscular stance has also been boosted by the agreement between Turkey and Sweden and Finland on the eve of the summit, which paves the way for the two Nordic countries to rapidly join the alliance.

Ukraine will receive more longer-term help from Nato to bolster its defence against Russia. “Ukraine can count on us. For as long as it takes,” said Stoltenberg. “A strong, independent Ukraine is vital for the stability of the Euro-Atlantic area,” he added.

Nato has put together a Comprehensive Assistance Package for Ukraine, which includes secure communications, fuel, medical supplies, and body armour, equipment to counter mines and chemical and biological threats, as well as hundreds of portable anti-drone systems.

“Over the longer-term, we will help Ukraine transition from Soviet-era equipment to modern Nato equipment,” said Stoltenberg, adding that this will boost interoperability and further strengthen its defence and security institutions.

President Volodomyr Zelenskiy addressed the meeting by video to criticise the alliance's current help and plead for more arms. Zelenskiy told the Nato leaders that Ukraine’s fight was Europe’s fight.

“[Russia] wants to absorb city after city in Europe, which the Russian leadership considers its property and not independent states. This is Russia’s real goal. The question is – who is next for Russia? Moldova? The Baltic states? Poland? The answer is all of them,” he said.

Stoltenberg said that the allies are preparing for a long war. “Wars are unpredictable, but we have to be prepared for the long haul. And that was the clear message to all of us in the room for President Zelenskiy,” he told a press conference.

Ukraine's Foreign Minister Dymtro Kuleba later tweeted: “Today in Madrid, Nato proved it can take difficult, but essential decisions. We welcome a clear-eyed stance on Russia, as well as accession for Finland and Sweden. An equally strong and active position on Ukraine will help to protect the Euro-Atlantic security and stability.”

The new Strategic Concept for the Alliance – which was last updated in 2010 – sets out the alliance’s priorities, core tasks and approaches for the next decade.  It says that Russia’s war of aggression against Ukraine has shattered peace and gravely altered Nato’s security environment.

“In light of its hostile policies and actions, we cannot consider the Russian Federation to be our partner. However, we remain willing to keep open channels of communication with Moscow to manage and mitigate risks, prevent escalation and increase transparency,” the Strategic Concept says. “Any change in our relationship depends on the Russian Federation halting its aggressive behaviour and fully complying with international law.”

Stoltenberg told a press conference that Russia had walked away from Nato's attempt to build a partnership, and relations were now the worst since the Cold War. "[Ukraine] has made it impossible for us to have the kind of partnership and engagement with Russia that we worked for for so long."

China is also highlighted as a challenge to Nato for the first time. "We see a deepening strategic partnership between Moscow and Beijing," Stoltenberg told a press conference. "China is not our adversary but we must be serious about the challenge it represents."

The Strategic Concept reaffirms Ukraine’s eventual ambition to join Nato. “We reaffirm the decision we took at the 2008 Bucharest Summit and all subsequent decisions with respect to Georgia and Ukraine,” the document says. Nato will also develop its partnership with Bosnia & Herzegovina and step up its support for Moldova.

The new Strategic Concept is meant to be backed up by higher spending by Nato countries. Nine allies now reach – or exceed – Nato’s target of defence spending representing 2% of GDP, with 19 having clear plans to reach it by 2024.

“Two percent is increasingly seen as a floor, not as a ceiling,” said Stoltenberg.