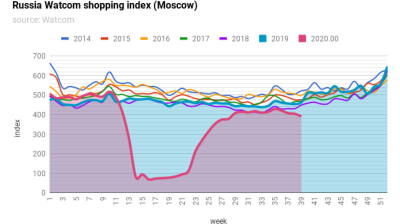 Moscow’s Watcom shopping index starts to fall again in September after making back most of its losses in July and August
By bne IntelliNews October 1, 2020

Russia’s leading shopping malls had made back 85% of the ground they lost during the coronavirus (COVID-19) lockdown in May and June by the 36th week of this year, according to the Watcom Shopping index. However, by week 39 (September) there were the first signs that traffic was falling off again as the coronavirus infection rates in Moscow doubled to over 2,000 cases again.

Russia’s economy has fared better than expected, partly because of strong consumption that bounced back once the movement restrictions were eased.

Retail turnover in the capital’s largest malls collapsed following the imposition of a strict lockdown regime by the city government in May. Sales fell by 74.2% compared to the same week a year earlier. They were at their nadir in the 16th week of the year and remained down by about 60% for the next month and half.

The foot traffic in the leading malls was clearly recovering at the start of September and regained levels seen last year, but by the end of the month the trend reversed and traffic was clearly starting to fall off again as more Russians self-isolated.

Data released on September 20 showed a surprising slowdown in retail sales growth from -1.9% year on year in July (revised from -2.6% y/y) to -2.7% y/y in August, according to VTB Capital (VTBC).

“The evidence had pointed to another strong recovery in retail sales, but the breakdown showed that the sector was weighed down by a sharp fall in food sales, from -2.0% y/y to -4.1% y/y, while non-food sales continue to recover, from -1.7% y/y to -1.2%,” Alexander Isakov, chief economist at VTB Capital, said in a note.

In August, consumer spending patterns improved only slightly versus July (up 0.2% y/y versus down 0.7%). This was primarily due to spending on services, which fell 17.5% y/y following a 21.6% contraction in July.

A renewed slowdown was also reflected in the manufacturing PMI that was released on October 1 and also returned to a contraction of 48.9 in August after the 51.1 growth in July. Any index number below 50 represents a contraction.