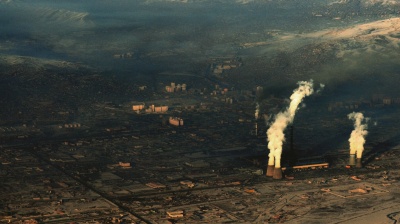 Urtnasan Nyamjav, Mongolia's environment minister, is the latest politician to be found wanting in the face of Ulaanbaatar’s grim winter air pollution problem. Prime Minister Oyun-Erdene Luvsannamsrai this week gave her the chop, arguing her efforts to solve the capital city’s smog dilemma lacked the required vigour in the face of the enormous challenge.

Right from her appointment a year ago, Urtnasan was under fire because of a widespread feeling that she did not have the necessary qualifications for her position, a post that also gave her the tourism brief. She is generally perceived by the public as a career journalist with little experience in environmental or tourism issues. Mendsaikhan Zagdjav, the food, agriculture and light industry minister, will now serve as an interim environment and tourism minister, while Ulaanbaatar Mayor Sumiyabazar Dolgorsuren has been specifically tasked with combatting the air pollution.

Ulaanbaatar has suffered from winter air pollution for two decades. Few places in the world can outdo it for the scale of the difficulties. Aside from smoke from power plants and car emissions, the burning of raw coal for heating on the outskirts of Ulaanbaatar in ger (yurt) areas—where residents have no central heating piping—has been identified as the main culprit behind the blight.

In Ulaanbaatar—home to 46% of Mongolia's population, or more than 1.8mn people—more than 60% of inhabitants live in ger districts. As more and more people from rural areas have flocked to the city, the air pollution problem has worsened.

The topography of Ulaanbaatar poses is a headache. The city lies at the bottom of a valley, surrounded by four mountains. Due to temperature inversion, haze frequently obscures both its landscape and the mountains. The inversion traps cold air along with the contaminants within it beneath warm air. Chilly air from the neighbouring highlands seeps into and beneath the city's warm air, while the mountain ranges and other climatic circumstances frequently prevent wind, rain or snow—elements that serve to remove air contaminants.

The long-term impact of air pollution in Mongolia has yet to be decisively determined; nevertheless, specialists have concluded that children born in Ulaanbaatar after the year 2000 may go on to suffer severe respiratory ailments when they reach their 30s or 40s.

Also, according to the non-governmental organisation Breathe Mongolia: "Fertility rates in Ulaanbaatar indicate a direct link to air pollution levels. Mongolia's fertility rate fell by 25% between 1990 and 2017, with the average number of children born to a single woman falling from four to three. Medical records from 2014-15 demonstrate a cyclical association between air pollution and fertility in Ulaanbaatar: there was a 3.2-fold drop in successful conception in January (the month with the highest levels of the air pollutant PM2.5) compared to October."

In 2019, the government outlawed the use of raw coal in Ulaanbaatar and introduced refined coal briquettes to the public. They were marketed as odourless and as having a higher burning point than raw coal. However, after the briquettes became available, there were several reports of individuals dying from asphyxia after using the new fuel. The government addressed concerns by urging the public to clean their stoves before using the fuel and doubled down on the proposition that the fuel was considerably safer than raw coal.

Inhabitants of Ulaanbaatar have claimed that this winter’s air pollution is worse than what was endured last year. In response to the criticism, Urtnasan at a parliamentary session on January 11 stated that the cause of the increase in air pollution was people burning more of the refined coal.

On January 12, the cabinet formed a working group that was given a week to evaluate refined fuel issues and assess the increase in air pollution. The working group was led by Urtnasan and Tavinbekh Nansal, the energy minister.

Following the cabinet meeting, the group used drones to monitor air quality. There was a public outcry as city dwellers complained about what they saw as a lack of dedication in their efforts. That spurred the two ministers to visit a ger district and the Tavan Tolgoi fuel company. Nonetheless, it seems that the group was not able to provide tangible results to sway the prime minister into retaining Urtnasan in her position.

Just one day before her dismissal, Urtnasan collaborated with the European Union's ambassador to Mongolia, Axelle Nicaise, on the launch of the Switch Off Air Pollution initiative. It is funded by the European Union to the tune of €2.1mn and aims to prevent heat loss in ger areas. There is a long way to go.

Hungarian government declares another state of emergency
23 hours ago
Russian bond defaults could soar after US lets payment exemption expire
23 hours ago
Lira drags Turkey further down road to hell
1 day ago
No progress in talks between Bulgaria, North Macedonia on lifting veto on EU accession talks
1 day ago
Former Moldovan president Dodon detained in treason and corruption case
1 day ago