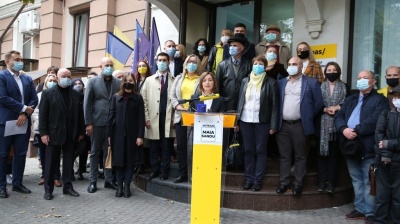 By Iulian Ernst in Bucharest November 4, 2020

Maia Sandu, the pro-EU candidate in the Moldovan presidential election, confirmed that she has the same goal as Renato Usatii, who came third in the first round with 17% of the votes, namely calling early elections.

Sandu, who will face incumbent President Igor Dodon on November 15, agreed to meet Usatii on November 4 and is looking for common grounds to secure the support of his voters in the runoff.

“We will identify the legal methods by which to trigger early elections. … I have a message for all voters, including those who voted for Renato Usatii — you want us to get rid of corruption, punish thieves and get rid of Dodon. That's what we want. We can do this with your support," wrote Sandu on Facebook.

Loved in Balti, Moldova’s second-biggest city, where he serves as mayor, populist politician Usatii has a controversial political and business career.

Usatii made his fortune during the 1990s in Russia and he has been constantly suspected of but never proved to have at least maintained contacts with a faction of Russia’s FSB.

The Russian authorities are now investigating Usatii for alleged “organisation of a criminal group”.

Moldova to connect to Romania’s power grid under €261mn project

A 400 kV, 158-km long power transmission line will be built to link Moldova’s capital city Chisinau to the border with Romania, with the aim of connecting the electricity networks of the two ... more

Pro-EU candidate Maia Sandu is likely to defeat incumbent President Igor Dodon in the second round of the November 1 presidential elections, according to a poll conducted for WatchDog.MD ... more