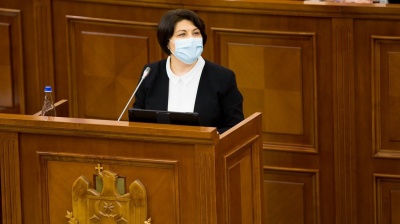 After winning the presidency in 2020, Sandu hopes to force a snap election that, she hopes, will deliver a parliament able to produce a government she can work with to pursue her reform agenda.

But Sandu’s scenario is threatened by the emergence of a new majority, formed by the Socialists of former President Igor Dodon, who paid a visit to Moscow on the day the vote for PM-designate Gavrilita was held in parliament. The visit was organised by Russia's embassy in Chisinau. The same day, the Socialists (PSRM) announced the new majority, so far ignored by Sandu in the process of nominating a new PM candidate.

No lawmaker voted for Gavrilita on February 11, as the pro-EU parties in parliament followed the strategy of triggering snap elections by the repeated rejection of two prime ministers designated within 45 days.

The president of Moldova is entitled to dissolve the parliament in only two circumstances: if the lawmakers fail to appoint a prime minister after two attempts, but no sooner than 45 days after the first nomination, and if the lawmakers fail to exert the legislative function (passing laws) for at least three months. The latter is of rather limited practicability.

Sandu again nominated Gavrilita as PM-designate on February 11, the same day she was rejected by lawmakers, in line with her announced strategy of dissolving the parliament and trigger early elections.

In her speech to the parliament, Gavrilita openly argued for the dissolution of the parliament and early elections, pledging at the same time to implement the promised reforms in case the “undeclared majority” votes for her.

The “undeclared majority” revealed its identity later in the same day and even came up with own candidate for the PM post: Maria Durlesteanu, former minister of finance in the cabinet of Socialist prime minister Zinaida Greceanii (2008-2009).

PSRM announced a new majority in parliament, formed by 54 MPs — in the 101-seat parliament — from the PSRM, the Pro Moldova platform (including the lawmakers loyal to fugitive businessman Ilan Shor) and several independent MPs. The stability of this majority remains uncertain, since its candidate for the PM seat, Durlesteanu, claimed that she was not aware of the support provided by Ilan Shor’s party.

Even more surprising, Durlesteanu stated that she shares “right-wing views” and voted for Sandu in the presidential elections last year. But she declared herself ready to run for the prime minister seat and head “a government of technocrats.”

The route to early elections thus becomes complicated, since the constitution compels the president to consider the prime minister candidate of a formal majority in parliament, as explained by former Constitutional Court judge Alexandru Tanase.

Sandu ignored the Socialists’ candidate on February 11 but Gavrilova’s second candidacy can be challenged at the Constitutional Court, or rejected again by the Socialist-led majority that would thus be entitled to appoint its own candidate.