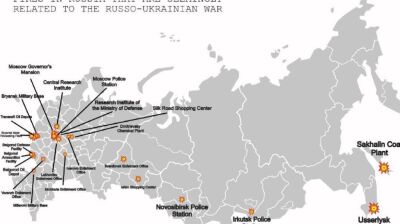 Map showing locations of sabotage attacks in Russia since its invasion of Ukraine began. / Taken from @AlexKokcharov Twitter
By Social media correspondent Dominic Culverwell May 6, 2022

Footage of a masked person firebombing a military recruitment centre in Russia on May 4 adds fuel to the theory that indignant anti-war saboteurs are taking a stand against the Kremlin’s invasion of Ukraine.

Explosions and fires seemingly related to the Russian invasion of Ukraine have been noted by observers since April 21. As bne IntelliNews published last week, pro-Ukrainian saboteurs could be giving Moscow a taste of its own medicine.

Although Russian officials have referred to the fires as accidents, CCTV footage showing an individual throwing seven Molotov cocktails at a military enlistment office in Nizhnevartovsk adds significant weight to the sabotage narrative. The Molotov thrower is seen wearing a jumper with the letter "V" crossed out, signifying an anti-war stance. "V" and "Z" became symbols of support for the Russian invasion after the letters were painted on Russian military vehicles sent to Ukraine.

The culprits remain unknown. However, in addition to the CCTV footage, they filmed themselves in the act, with the video going viral on Russian and Ukrainian social media. Their actions have received huge support from anti-Kremlin and pro-Ukrainian accounts online and the video is the first visual proof of alleged saboteurs igniting fires at Russian facilities.

In addition, several other noteworthy fires have been reported in the last week, although there isn’t substantial evidence to prove sabotage as the cause.

Anton Gerashchenko, the adviser to the Ukrainian foreign ministry, shared a video on Twitter of a fire at a gunpowder and explosives factory in Perm on May 1, which killed two people. The factory produces weapons used by Russian forces in Ukraine, including charges for Grad and Smerch multiple launch rocket systems and air defence systems. 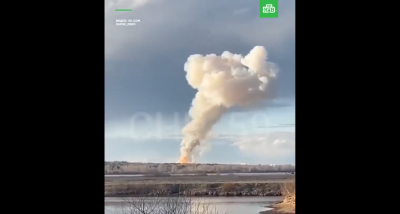 But it’s not just military facilities being targeted. In Moscow, 34,000 square metres of warehouse space belonging to the pro-government "Prosveshchenie" publishing house burned down. The company was involved in controversy after a decision to remove “inappropriate” references to Ukraine from its history, geography and literature school books, Mediazona reported. 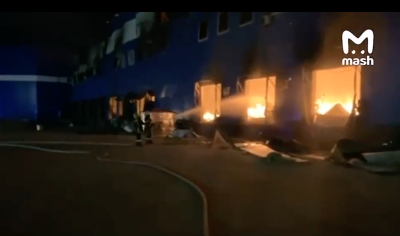 The increasing number of suspicious fires at sensitive facilities in the last week certainly provides more proof to the sabotage hypothesis, even if Russian and Ukrainian officials have yet to comment on the matter. If the firestarters in Nizhnevartovsk are legitimate, then they represent an ardent new anti-war movement in Russia and it is probable similar actions will continue to be posted on social media to encourage others.

However, it is still not known whether this is being orchestrated by Kyiv or by individuals. Known anti-war saboteur groups working in Belarus, such as the Belarusian Cyber-Partisans and the  “Community of Belarusian Railway Workers”, work independently from government influence. It is possible that many saboteurs in Russia are the same, particularly in regions far from Ukraine and Moscow.

Although recent polls indicate that a large number of Russians are in favour of the invasion, the thousands arrested for protesting and viral anti-war art movements certainly show that there is strong Ukrainian support as well. As the war drags on longer than expected and the number of Russian bodies piles up, the apparent acts of sabotage may indicate that opposition forces are banding together. More militant anti-war action will thus materialise.