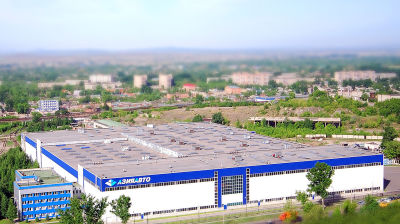 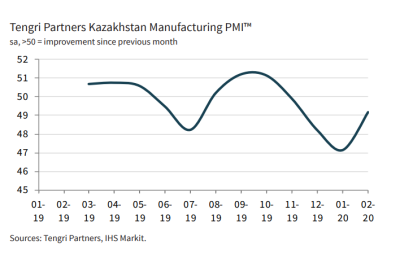 Operating conditions across the Kazakh manufacturing sector deteriorated for a fourth consecutive month in February, although there was a noticeable improvement on January, according to the latest Tengri Partners Kazakhstan Manufacturing Purchasing Managers’ Index (PMI) released by IHS Markit on March 2.

The headline PMI for Kazakh manufacturing was recorded at 49.2 in February, up from 47.1 in December. Anything above 50.0 signifies an expansion.

Anuar Ushbayev, managing partner and chief investment officer at Central Asia-based merchant banking group Tengri Partners, said: "Although at present there are yet no signs of any resolute rebound in activity within the private non-oil manufacturing sector, we did observe a slower rate of decline across most components of the Manufacturing PMI. Continued rise in both input and output prices as well as upbeat business expectations may indicate that purchasing power is building, but that is to be further confirmed in the coming months." 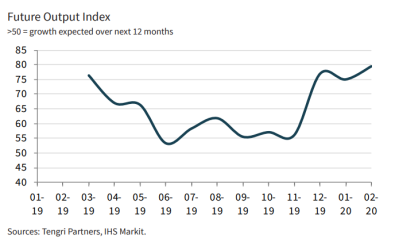 The analysis from Central Asia-based merchant banking group Tengri Partners added: “Central to the continued downturn were further reductions in both output and new orders. Production declined for the fourth month running and at a solid rate. Meanwhile, order book volumes fell for the third consecutive month, with panellists linking the latest decline to weak demand conditions amid lower client purchasing power.”

“Kazakh manufacturers increased workforce numbers for the first time since last November during February,” the report added. “However, the rate of job creation was only fractional. Higher staffing levels and lower production requirements allowed firms to clear backlogs during February, extending the current sequence of decline to three months. Despite softening, the rate of backlog depletion remained sharp overall.”

Tengri Partners also noted that firms remained confident that output would rise over the coming 12 months. It noted that “anecdotal evidence” linked confidence to expectations of an improvement in demand conditions.

The Kazakhstan Manufacturing PMI produces a headline figure derived from a survey, produced by IHS Markit for Tengri Partners—the survey has been conducted since March 2019 and is an early indicator of the economic health of the Kazakhstan manufacturing sector. The measurement is derived from indicators for new orders, output, employment, suppliers’ delivery times and stocks of purchases. Any figure greater than 50.0 indicates overall improvement in the sector.

Kazakh manufacturing ekes out PMI expansion in May
New coronavirus cases decline across emerging Europe but the epidemic’s not over yet
Borealis pulls out of $6.8bn plan to build petrochemical plant in Kazakhstan