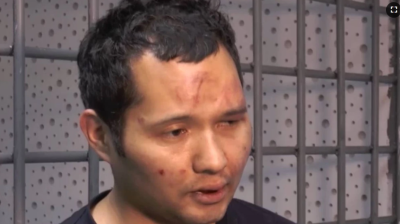 Kazakhstan and Russia’s bid to make the case that foreign-trained terrorists were instrumental in creating the violent unrest seen in the Central Asian country last week were not helped on January 9 by a curious episode centred on a “foreign terrorist” who turned out to be a well-known Kyrgyz jazz pianist.

Outrage was sparked in Kyrgyzstan after Kazakh state television on January 9 showed video footage of a man whom Kyrgyz viewers quickly identified as the musician, Vikram Ruzakhunov, who regularly travels to Kazakhstan. The TV report identified the man seen in the sequence as an alleged “foreign terrorist”.

The video shown by Kazakh state TV claimed that Ruzakhunov was “hired” to travel to Kazakhstan to take part in the protests.
Kyrgyz musicians came out in support of Ruzakhunov in Bishkek, with demonstrations mounted outside the Kazakh Embassy.

“There is no way Vikram Ruzakhunov can be prosecuted as a terrorist. We cannot and will not sit still when our citizen is being accused, especially of terrorism,” the head of Kyrgyzstan's State Committee for National Security, Kamchyek Tashiev, said.

With clear marks of a recent beating on his face, a young man later identified by Kyrgyz viewers as Ruzakhunov says in the video: “On [January 1], unknown people contacted me and offered me 90,000 tenge [$207] to take part in meetings [in Kazakhstan]. And since I’m unemployed in Kyrgyzstan, I agreed.”

The incident has created a rift in Kazakh-Kyrgyz ties at a time when Kyrgyzstan has 150 soldiers working with Russian-led “peacekeepers” in Kazakhstan. The troops were sent despite many people in Kyrgyzstan seeing the move as unnecessary and unjustified.

Ruzakhunov’s alleged "confession" in front of the camera was rather detailed. Besides saying he was invited to come to Kazakhstan by unknown people who purchased him a ticket for January 2, the musician added that he was at one point taken to a room where there were “about 10” Tajik and Uzbek citizens. He said he was frightened and decided to return to Kyrgyzstan before he was detained in the village of Samsy, around 70 kilometres west of Almaty, on January 3.

Ruzakhunov was released from custody on January 10 and returned to Kyrgyzstan, where he told journalists he was not tortured during his time in Kazakhstan. He said he sustained the injuries on his face when Kazakh police detained him.

Asked about his videotaped "confession," he said the men filming him told him that if he admitted to taking money to participate in the "meetings" he would be deported immediately.

There are some reports that at least five Kyrgyz have been detained in Kazakhstan in connection with the unrest. One report even said as many as 38 Kyrgyz citizens were being held in the southern city of Shymkent. A later report said they had been released.

The Kyrgyz Foreign Ministry said Kazakh authorities were preventing lawyers from seeing detained Kyrgyz citizens. The ministry added that it had sent a note of protest to Kazakhstan’s prosecutor-general over the Ruzakhunov case.