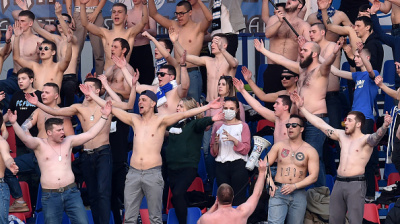 Many soccer fans around the world may have been pleased to find they had a match to bet on, but at what cost to public health? Some fans wore face masks to the game.
By Christina Petru March 30, 2020

COVID-19 has rightly grounded almost all sports fixtures—with one big exception being football matches in Belarus’ Premier League. The usually minor matter, on the international scale, of a derby between FC Minsk and Dinamo Minsk on March 28 earned global attention, thanks to the desperation of gambling companies and their equally desperate customers. It’s time to desist—lest we kill enough people to make up an entire league of sportsmen and women—while stroking the ego of a moustachioed psychopath.

Belarus’ President Alexander G. Lukashenko is often described by international media outlets as “Europe’s last dictator”. In power since the exact date of the presidency’s creation, July 20, 1994, Lukashenko has expressed his chagrin toward this label on a number of occasions, often causing bilateral controversy in the process.

Guido Westerwalle—Germany’s first gay foreign minister, who tragically passed away in 2016—took the full brunt of the strongman’s ire, when he called out Lukashenko’s dire human rights record in March 2012. “It is better to be a dictator than gay!” Lukashenko snapped. Besides being prurient and incredibly pathetic, Lukashenko’s remark was also very stupid—as Europe wanted to squash Lukashenko with sanctions at the time. The diplomatic incident which followed did not play well for Europe’s last dictator. Westerwalle quietly reaffirmed his “determination not to move one inch from my initial commitment to human and civil rights in Belarus”. Then, he served Lukashenko with one of the most punishing smack-downs I can recall. One off-colour homophobic remark ended up costing the government of Belarus billions of dollars—while the football team the world is currently betting on also found itself in sticky circumstances.

By July 2012, Westerwalle had helped crash brutal sanctions against Belarus, targeting more than 200 politically affiliated people for their roles in the country’s awful record on human rights under Lukashenko, and the president’s brutal crackdown on any form of political opposition.

Left without a bus

One of the individuals hit was Yury Chyzh—owner of Dinamo Minsk—who literally found himself unable to hire a bus to transport juniors to a soccer tournament. The coach hire company’s bank in Lithuania returned Chyzh’s payment, after the football team and 17 other entities owned by Chyzh were sanctioned.

Sanctions against Chyzh were ultimately lifted on July 13, 2015, as despite the ownership of a very large swathe of Belarus’ highly corrupt economy, it could not be proven that President Lukashenko actually benefited financially from Chyzh. I thus underscore my remarks—for the avoidance of all doubt—with the reminder that the European Union has exonerated Chyzh of financing a dictator, and that Chyzh is not guilty of any crime before law.

However, I’d posit that Chyzh, his football team, and Belarus’ football league, are now helping Lukashenko to polish his horrible image, in a very horrible way—even though his horrible image is well-earned. The coronavirus has put a freeze on just about all global sporting events, for very well-founded public health reasons. Thus the many remarks on how Belarus now has the only soccer league left to bet on. By betting on Belarus’ top league, you’re prettifying a president whose understanding of public health is killing people.

I can find no better way to illustrate this point than to point at Lukashenko’s recent remarks to news outlet Belsat. He considers the virus to be silly Western hogwash—best cured by drinking vodka.

Here are Lukashenko’s remarks: “We have survived viruses before. There were more complicated viruses: swine flu, bird flu, and atypical pneumonia”. Lukashenko also mused, urging calm while advocating absolute insanity: “There should be no panic, all you need to do is to work. I am happy when I watch TV and see people labouring in the fields, driving tractors, and no one is talking about the virus. There the tractor will cure everyone. The field will heal us all”.

Pontificating further on the pandemic—with a monologue that deserves condemnation from the World Health Organisation (WHO)—Belarus’ only president since the collapse of the Soviet Union cracked a joke which will likely lead to the loss of human life.

“I am a non-drinker, but at this time I jokingly say that you should not just wash your hands with vodka, but probably also poison this virus with it [from within],” Lukashenko chuckled. “In terms of pure alcohol, 40-50 grams per day should be consumed. But not at work!”

Belarus’ Ministry for Foreign Affairs, as is customary, declined all comment. Their website does, however, note a record attendance at the game. It's a great shame for Lukashenko that Westerwalle is no longer with us—for if he were, he'd wryly point to Lukashenko's own musings on disease, in March 2003, when the president fuelling Europe's pandemic made the following observation.

“The ideology of the state is like an immune system for an organism. If the immune system weakens, then even the smallest infection becomes simply fatal.”

Lukashenko then reiterated that the “state” and introducing “a pro-state ideology into the minds of ordinary citizens” was a necessary step to protect the country “from any possible infection”.

This is sadly the Lukashenko doctrine—which endures, despite the easing of EU sanctions. Silencing dissent is so important to this autocrat that even a global pandemic can be used to consolidate the “state”. But we must find other ways besides sports betting to while away our time in isolation—for when laid bare, betting on football in Europe’s last dictatorship gives us little leverage in condemning this public health disgrace.

Christina Petru Ph.D (Кристина Петру), is an economist, academic and financial journalist. A contributor to Emerging Europe and U.S News & World, Dr. Petru has consulted for international lenders and third sector organisations such as the World Bank across the former Soviet Union since the early 1990s.

Lukashenko: I am no enemy of the people

COVID-19 and Trump’s indifference helped human rights abusers in 2020
Belarusian government sees $2bn of withdrawals, issues $580mn worth of bonds in 2020
Lukashenko: I am no enemy of the people

ING THINK: Growth in the Balkans: from zero to hero again?
2 days ago
FPRI BMB Ukraine: Most Ukrainians are optimistic about 2021 – poll
3 days ago
COMMENT: Record high debt levels will slow post-coronavirus recovery, threaten some countries' financial stability, says IIF
5 days ago
COMMENT: The Manafort Pardon: a finger in the collective eyes of Ukrainians
10 days ago
STOLYPIN: Scope for limited progress under Biden, so long as the past remains the past
10 days ago