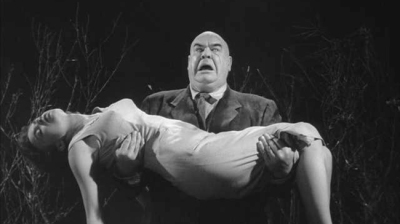 Tor Johnson as a zombie with his victim in cult movie Plan 9 from Outer Space (1959).
By bne IntelliNews September 1, 2019

Turkey has so many living dead companies that President Recep Tayyip Erdogan’s latest attempt to stimulate the recession-hit economy by turning on the credit taps is reportedly floundering.

“The core problem in the economy is there are way too many zombie companies,” Umit Ozlale, a professor of economics at Ozyegin University in Istanbul told Bloomberg on August 28. “The government insists on offering monetary solutions to fix problems in the private sector. Instead, zombie companies need to be cleared off the system, and should be replaced by more innovative firms with better business plans and export capabilities.”

The government made a push to re-spark lending ahead of this year’s March local elections and there was a record 425 bp cut in interest rates in July. But efforts to rev up the credit engine are said to have sputtered.

On an annualised basis and adjusted for foreign-currency fluctuations, loan growth is hovering below 5% after briefly touching 20% in April, Bloomberg said. Companies are in no mood to borrow even though the average rate on lira loans fell to near 19%, from a peak of almost 34% last year.

In another attempt to give lending fresh momentum, the central bank unveiled changes this month that link the amount of cash banks must put aside as reserves to how much credit they extend.

Results will probably disappoint, according to Fitch Ratings.

“Most banks have a limited appetite to accelerate loan growth given the volatile operating environment and we think the incentives are unlikely to sway them, in most cases,” Fitch analysts including Huseyin Sevinc said in a report.

The distress is seen on banks’ balance sheets. Non-performing loans as a share of total credit rose to 4.4% in June from 2.9% at the beginning of 2018, according to the regulator. It predicts the ratio could climb to 6% this year.

The corporate sector’s foreign-exchange liabilities stood at $309bn at the end May, equivalent to almost 40% of Turkey’s GDP. When netted against their international assets, the shortfall is $180bn. That is down from the record $220bn seen in March.

“The country as a whole, in particular the corporate sector, is more leveraged than a decade ago,” Kubilay Ozturk, an economist at Deutsche Bank, was quoted as saying. “Hence the marginal impact from the credit impulse on the real economy is diminishing.”