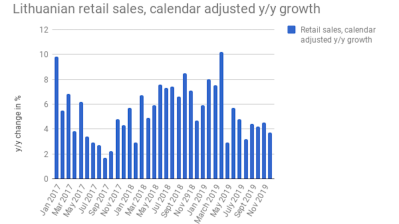 Sales thus decelerated their growth rate in comparison to the 4.5% annual expansion in the eleventh month. Retail sales have been on an uninterrupted growth track since 2015. An improving labour market and growing incomes remain key drivers of retail turnover in Lithuania.

Strong household consumption - combined with rebounding investment - is expected to keep the Lithuanian economy on a path of steady growth this year. Lithuanian GDP growth came in at a solid 3.6% y/y in the third quarter (3.7% y/y without adjustment). Fourth quarter figures will be released on January 30.

Of the main retail categories, sales of food, alcohol, and tobacco declined 0.1% y/y in December after growing 0.4% y/y the preceding month.

Sales of non-food items grew 5.5% y/y in December, clearly below the expansion of 8.8% y/y in November. Sales growth of automotive fuels picked up to 7.6% y/y, compared to 3.4 y/y the preceding month.

In monthly seasonally and calendar-adjusted terms, sales declined 0.1% in December, compared to a growth of 0.9% m/m in November.

In nominal terms, sales came in at €1.16bn in current prices in December, above €1.06bn in November and also expanding versus €1.09bn in December 2018, Statistics Lithuania noted.