Latvia reports 313 COVID-19 cases, state of emergency to be declared 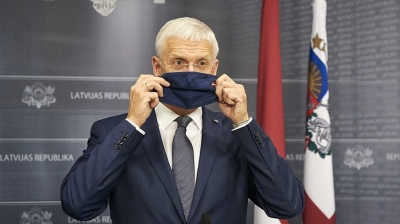 Latvia confirmed 313 new cases of coronavirus (COVID-19) on November 4, according to the country’s National Disease Prevention and Control Centre (SPKC), bringing the total number of cases since the start of the pandemic to 6,752.

It is the largest daily tally of new cases yet recorded. However, it was also the day on which the largest number of tests in a single day were conducted. Six deaths were confirmed, three victims aged 60 to 80, three aged 80 to 90.

Of 7,328 tests carried out, 4.3% were positive, up on the 3.3% rate the previous day. A rate of more than 3% is regarded as an indication that the disease is spreading rapidly. This is the largest number of tests so far conducted in one day. Alarmed by the trend, the Latvian government was set to declare state of emergency on November 6.

Latvia’s head of state Egils Levits has said he favours the idea of declaring a state of emergency in Latvia to stem the spread of coronavirus.

According to Prime Minister Krisjanis Kariņs, the situation is "very serious" with many more people becoming infected and demand for hospital treatment rising.

"Unfortunately, we see that the number of deaths is also increasing and we understand that behind every such event is a family's personal tragedy," he said.

"In order to control the spread of COVID-19 in Latvia, it is necessary to take action, and this also means stronger measures,” said Kariņs, pointing out that in contrast to some other European countries where the disease appears to be out of control, in Latvia things can still be done to restrict the spread of the coronavirus.

So far 1,444 patients have recovered from infection and 83 have died. The National Health Service (NVD) said Latvia's hospitals have 240 patients being treated for coronavirus symptoms at the moment (down on 249 the previous day), of which 228 are displaying moderate symptoms while 12 have serious symptoms.

On November 4, the 14-day cumulative number of COVID-19 cases per 100,000 of population was 147.4 in Latvia, 340.9 in Lithuania and 75.3 in Estonia, according to data from the European Centre for Disease Prevention and Control, with the rate rising in all three Baltic states compared to the previous day.