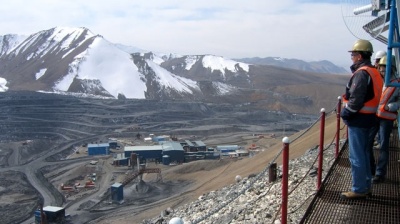 It's a different view from the top: Kumtor's fate hangs in the balance once more.
By Chris Rickleton for Eurasianet February 26, 2021

Kyrgyzstan appears to be gearing up for a fresh assault on its largest private investor – the operator of the gargantuan Kumtor gold mine.

The prospects for this campaign look uncertain.

Earlier this month parliament announced it was forming a 12-member commission to take one more look at whether Canada-headquartered Centerra Gold is living up to prior government-mandated commitments on how it runs the mine.

The Kyrgyz state owns a one-quarter stake in Centerra, the Toronto stock exchange-listed miner running Kumtor, but that has not been enough to end the company’s recurrent regulatory headaches.

President Sadyr Japarov, who came to public prominence a decade ago through his decidedly lively campaigns to have the mine nationalised, is for now sending mixed signals.

Shortly after seizing power in October, he moved to dispel concerns that he would seek Kumtor’s nationalisation. The time for that was gone, he said, because the mine’s reserves had been substantially depleted in the years since his supporters were staging the rowdy protests that made him famous.

A review would be more appropriate at this time, he said.

Two governments have pushed to tinker with the agreement reached between Centerra and the government since 2017. Both portrayed the changes as victories for Bishkek.

Authorities had cranked up the pressure on the company in the buildup to talks through lawsuits filed in the highly pliable local courts and travel bans for Centerra’s foreign employees.

Before that arrangement could come into force, Isakov’s successor, Mukhammedkaliy Abylgaziyev, argued the deal had been badly negotiated. He argued for and won an increase of $63mn dollars in payments on top of Isakov’s gains – “without taking on any obligations”, as he boasted.

Fat lot of good it did him.

That second deal is now the subject of a criminal probe that landed Abylgaziyev in jail on January 26. Explaining its motivations for the arrest, the State Committee for National Security, or GKNB, said the 2019 deal allowed for an expansion of Kumtor’s concession “unreasonably and in violation of national law”.

Meanwhile, Kumtor Gold Company told news outlet 24.kg that the perimeters of its concession have remained unchanged since a framework agreement thrashed out in 2009.

That is true, although the Abylgaziyev deal did reverse a 2012 government resolution that had for all practical purposes reduced the concession’s territory by 160 square kilometres. Forty square kilometres of that land are part of a national nature reserve.

Abylgaziyev’s lawyer has told media that investigators had not brought up Kumtor in their initial interrogations of the former premier, who faces other unrelated charges too.

Another investigation into alleged Kumtor malfeasance initiated less than two weeks after Japarov went from prisoner to president has gone quiet.

On October 27, the anti-economic crimes service, known locally by the abbreviation Finpol, announced that it had uncovered machinations at the company that deprived the state of $100mn in unpaid taxes and insurance contributions.

Finpol has since had its wings clipped, however, and been placed under the purview of the Interior Ministry. The body’s chief, Syimyk Japykeyev, who briefly worked as a lawyer at Kumtor and had ascended to the job during the same turbulence that propelled Japarov to power, was far from happy about this change.

He complained on Facebook that his office’s anti-corruption efforts are being blocked by vested interests. “The people support Finpol!” he claimed.

Japarov countered the same day with comments in support of the restructure, advising authorities not to "trample on the interests of the people for the sake of the interests of one revolutionary".

This bureaucratic rumpus neatly embodies a vexing conundrum for Japarov.

Having once styled himself a thorn in the side of corrupt elites, Japarov now risks ceding ground to new populists less burdened by the responsibilities of state.

Two government sources told Eurasianet on condition of anonymity that the Finpol investigation into Kumtor was not initiated by Japarov.

The pliant parliament’s newly established Kumtor commission almost certainly was, however, and Japarov's administration recently contributed experts to the commission, upgrading its status.

Independent lawmaker Dastan Bekeshev certainly took this view when he accused Japarov of using the commission to do the president’s dirty work on the mine during a parliament session on February 17.

“What is the aim of this commission? Have there been some new violations or is it about horse-trading?” asked Bekeshev. Team Japarov might still be coming up with an answer to that question.

Ukraine's gas market reforms have been a huge success. By unbundling production and transport, the country has attracted hundreds of traders that compete on a vibrant market that has eliminated corrupt scams and brought prices down.

EXPLAINER: Just how bad are the sanctions on Russia’s ruble-denominated OFZ treasury bonds?

The White House has slapped new sanctions on Russia and targeted the Russian Ministry of Finance ruble-denominated OFZ treasury bills for the first time, the workhorse bond that is used to fund the budget. But what do the sanctions mean in practice?

The share price of Uzbek insurance company Universal Sugurta rose 200,000% in the first two months of this year, only to collapse again in March. It looks like a classic "pump and dump" play, but for the nascent market that's probably a good thing.

US e-commerce giant's push into the booming Polish market will make it much more competitive overnight.

Unbundled: the Gas Transmission System Operator of Ukraine
9 hours ago
EXPLAINER: Just how bad are the sanctions on Russia’s ruble-denominated OFZ treasury bonds?
1 day ago
Uzbekistan's stock market sees its first big "pump & dump" incident
1 day ago
Allegro will have to move fast to stem the Amazon flood
1 day ago
Kyrgyzstan president prescribes poison root for COVID-19
3 days ago