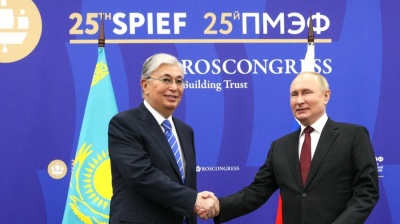 Tokayev caused a stir at the St Petersburg International Economic Forum when face to face he told Putin that Kazakhstan does not recognise the so-called people's republics in occupied Ukraine. / Kremlin.ru.
By Fuad Shahbazov July 20, 2022

When it comes to the shipping viability of its indispensable oil exports, Kazakhstan is not in a happy place. Nur-Sultan knows it, but more to the point, so does the Kremlin. Around four-fifths of the oil exported by Central Asia’s largest economy only makes it on to world markets thanks to the Novorossijsk oil terminal located on Russia’s Black Sea coast. What’s more, there are no obvious alternatives should the Kazakhs need to replace much or all of that capacity.

With Russia in the mood to pull multiple levers on world oil and gas supplies as it strives to battle back against the heavy sanctions imposed by the West in response to its war in Ukraine, the vulnerability of Kazakh oil consignments has already been amply demonstrated. Let’s delve into events so far.

On July 5, a Russian court in Novorossiysk ordered the Caspian Pipeline Consortium (CPC) that transits Kazakh oil to the port’s oil export terminal to halt shipments for 30 days, allegedly due to oil spill concerns. The terminal handles around 1% of global oil, thus the move was far from unnoticed on energy exchanges. Analysts also sat up as they assessed the latest development in relations between Moscow and ex-Soviet state Kazakhstan. Nur-Sultan has offered next to no backing for Russia’s decision to invade Ukraine, and some observers see the Kremlin pulling the strings on Kazakhstan’s oil exports as a method of reminding the country’s Tokayev administration exactly who’s in charge in the ex-USSR space.

Kazakhstan, which has provided 82 tonnes of humanitarian aid to the people of Ukraine, experienced tensions with Russia when the country’s President Kassym-Jomart Tokayev attended the 25th St Petersburg International Economic Forum (SPIEF) in June. Tokayev made it clear during an appearance with Russian President Vladimir Putin that Kazakhstan did not recognise the so-called Luhansk and Donetsk “people’s republics” in occupied Ukraine, labelled them "quasi-states."

Tokayev’s remarks, awkward for Moscow at such a high-profile economic event, provoked some provocative statements from various revanchist Russian critics. The suspension of the CPC pipeline followed shortly after.

However, this was not the first suspension of Kazakh oil exports at the mercy of Russia since the Ukraine conflict began in late February. In March, Russia temporarily froze oil exports via the CPC infrastructure claiming storm damage to the shipments facility, while in June it did so again after citing potentially hazardous items allegedly discovered in Black Sea waters, namely what Moscow officials said were possible WWII mines.

According to reports, the long-term halting of CPC’s operations would remove as much as 1.5mn barrels a day of much-needed crude from the global oil market, whereas for Russia, it would have virtually no impact as Russian oil makes up only 10% of CPC volumes. With shareholders like Shell, ExxonMobil, and Chevron, the CPC carries up to 1.4mn barrels/day of Kazakh oil to the European market, which is already constrained partly due to a supply cut from Libya amid political unrest. Of all stakeholders, Chevron is exposed the more as it accounts for 12% of the total output of the CPC.

Cuts to CPC pipeline flows have cost Kazakhstan hundreds of millions of dollars in lost revenue. With alarm bells ringing loudly in Kazakhstan over oil export dependence on Russian infrastructure and territory, Tokayev turned to US companies invested in drilling for Kazakh oil to help diversify oil exports away from Russia. Tokayev suggested that oil transportation across the Caspian Sea was “the most promising alternative”.

Prior to the outbreak of tensions with Russia over the Ukraine situation, there were plans to increase the volume of oil exports flowing through the CPC pipeline to up to 5.114mn tonnes this month, but that idea no longer looks realistic. Interestingly, the most recent CPC disruption came just one day after Tokayev held a phone conversation with EU Council President Charles Michel. During their conversation, Tokayev assured Michel that "Kazakhstan's hydrocarbon potential is available in order to stabilise the situation on global and European energy markets.”

If Russia is attempting to "punish" the EU and Kazakhstan and complicate the energy crisis more by cutting the Kazakh oil supply using its local courts, it is an approach that offers Moscow plausible deniability. Whatever the realities, debates have been sparked in Nur-Sultan over the need for urgent export route diversification. Nothing, however, can happen overnight.

Two main options for supply diversification are usually talked about: directing oil flows to China and dispatching oil in trans-Caspian and trans-Caucasus shipments via Azerbaijan and Georgia.

The China option would see Kazakhstan re-route oil flows but the pipeline to China can take oil from east and central Kazakhstan, while most of the large fields are in the country’s west. Technically, it would be a rather challenging task, and, according to a foreign oil company based in the country, "it is unlikely that the re-route of oil is possible."

The second option, which would entail increasing oil exports on tankers traversing the Caspian Sea to Azerbaijan, from where the European market becomes accessible, sounds more realistic—but there appears to be a stark shortage of tankers, and the project would require a great many. Again, officials might respond, “Great plan, but how many years can you give us to get it realised?”

Azerbaijan possesses the necessary energy infrastructure for oil flows to Europe, namely the Baku-Tbilisi-Ceyhan (BTC) oil pipeline that reaches Turkey. It has delivered around 518mn tonnes of oil to Europe since its inauguration. And in fact, the BTC pipeline already sends some Kazakh crude oil to Europe, though the volume is not significant.

The Russian court's decision to halt the CPC oil supply—later cancelled in favour of a small fine by a regional appellate court in Krasnodar—caused outrage in Kazakhstan. CPC argued that the ruling was unlawful in that it posed long-term risks to the pipeline's functionality. “CPC is a continuous-cycle enterprise. The immediate suspension of its activities could have irreversible consequences for the production process and cause adverse and uncontrollable processes at the facility,” the company said in a statement.

To some parties, the decision by the Krasnodar court to overturn the CPC suspension was a surprise and amounted to Moscow opting to de-escalate diplomatic tensions. But the markets won’t be in any doubt—Russia successfully sent the message that the fate of most of Kazakhstan’s oil exports remains in its hands. Russia's decision to hide behind provincial courts to camouflage a purely political context will not help reset relations with Kazakhstan. But the realities of the tense situation are inescapable.

Fuad Shahbazov is an independent policy analyst focusing on regional security issues in the South Caucasus and a Chevening FCDO scholar at the University of Durham School of Government and International Affairs (SGIA) . He tweets at @fuadshahbazov.
Read in IntelliNews Pro
Get IntelliNews Pro

CEPR's action plan for Ukraine's wartime economy
59 minutes ago
Missiles or sabotage: What caused the explosion at the Russian airbase in Crimea?
3 days ago
Population decline to take Emerging Europe back to the early 20th century
3 days ago
Czech government remains colour blind on green issues
3 days ago
Poland ups the ante in feud with Brussels over judiciary reforms
4 days ago