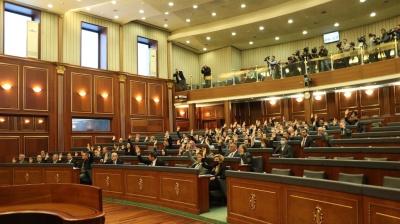 Kosovo’s parliament adopted a resolution on January 15 banning ethnic Serbs in Kosovo from voting in the Serbian referendum on constitutional changes on its soil.

The decision is likely to further strain relations between the two countries. Kosovo declared independence from Serbia in 2008, but it is still not recognised by Belgrade as a separate state.

On January 15, Kosovo prevented Serbian trucks from entering the country and distributing ballots in the run-up to the referendum.

Serbia’s referendum on January 16 concerns amendments to the constitution aimed to boost the independence of the judiciary and to enhance the transparency of the country’s rule of law institutions as part of reforms needed for Serbia to move closer to EU membership.

The resolution was adopted with 76 votes in Kosovo’s 120-seat parliament. Two opposition parties, the Democratic League of Kosovo (LDK) and the Alliance for the Future of Kosovo (AAK), supported the resolution. The Democratic Party of Kosovo (PDK) did not participate in the vote, while the Serbian List left the session.

In the resolution, MPs expressed the common position that opening of Serbian polling stations in Kosovo for voting in the Serbian referendum violates the constitution and the sovereignty of the country, the government in Pristina said in the statement

The parliament asked the government and relevant institutions to take all actions to prevent the violation of sovereignty and constitutional order in the country by holding a referendum of a foreign state in its soil.

On the day of the referendum, Serbs in the northern part of Kosovo staged protests in several cities against Kosovo’s ban to vote in a referendum. During the protest there was a heated debate between local residents and Kosovan police, broadcaster RTK reported.

On January 14, the Quint countries, France, Germany, Italy, the UK and the US, as well as the EU called on the Kosovan government to allow Serbs in Kosovo to exercise their right to vote in elections and electoral processes in accordance with this established practice.

“We note with regret that the Kosovo government has not allowed the Organization for Security and Cooperation in Europe (OSCE) to collect ballots of eligible voters living in Kosovo for the upcoming referendum in accordance with past practice,” the statement released by the US embassy in Serbia said.

"We call upon the governments of Kosovo and Serbia to refrain from actions and rhetoric that increase tensions and to engage constructively in the EU-facilitated dialogue.  It is important that both governments achieve progress towards a comprehensive agreement that unlocks the EU perspective and increases regional stability," it added.

The director of the Serbian Office for Kosovo Petar Petkovic said that Kosovo’s parliament had started an “open confrontation” with the Serbian people in the province.

"In that way, the parliament in Pristina tried to completely annul the most elementary political and civil rights of Serbs, which will have unforeseeable consequences." Petkovic said in the Serbian government statement.

EBRD 2022: Why Kosovo is one of the fastest growing economies in emerging Europe

EBRD 2022: Why Kosovo is one of the fastest growing economies in emerging Europe
EBRD 2022: Coal-dependent Kosovo prepares for leap to renewables
EBRD expects 30% GDP contraction in Ukraine in 2022, lowers emerging Europe projections