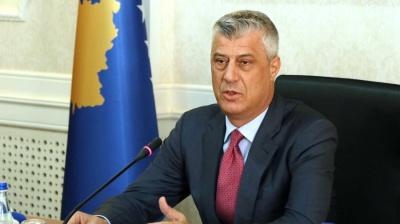 By Valentina Dimitrievska in Skopje June 25, 2020

Kosovo has withdrawn from talks with Serbian leaders scheduled for June 27 in Washington, after Kosovo’s President Hashim Thaci was charged with war crimes.

Thaci cancelled his trip to the US on June 24, immediately after the Kosovo Specialist Prosecutor’s Office announced that it had filed charges against him and nine others including the head of the Democratic Party of Kosovo, Kadri Veseli, over war crimes committed during the independence war with Serbia in 1998-1999.

Kosovan Prime Minister Avdullah Hoti on June 25 also decided not to participate in talks organised by the US president's special envoy for Kosovo and Serbia, Richard Grenell.

Hoti announced his decision on Twitter before he arrived in Brussels for talks with EU officials.

“Due to the new developments in Pristina as a result of the indictment submitted by the Specialised Prosecutor's Office, I have to return to my country to deal with the situation. I informed Ambassador Grenell that I could not attend the June 27 meeting at the White House,” Hoti said in a tweet.

“Thank you, Prime Minister Hoti. We understand your decision and we look forward to re-scheduling the meeting soon” Grenell replied.

Then in another tweet, after meeting EU officials, Hoti said that the disputes with Serbia can be solved only through dialogue, which should result in mutual recognition and normalisation of relations.

He did not comment on the Special Chambers’ decision, saying that his government will fully respect its international obligations.

After meeting Hoti, European Council President Charles Michel said that it is necessary for the dialogue between Kosovo and Serbia to resume and he hopes it will happen as early as in July.

The President of the European Commission Ursula von der Leyen confirmed she will meet Hoti and Vucic in Brussels.

“An important opportunity to discuss reforms needed to advance EU path of our Balkan partners & long-term recovery of the region,” she tweeted.

The talks in Washington were intended to be a new starting point for Kosovo and Serbia to resume dialogue on normalisation of their relations which stalled in November 2018 when Kosovo’s previous government led by ex-PM Ramush Haradinaj imposed 100% taxes on Serbian goods, a move aimed to force Belgrade to recognise Kosovo as a state.

The cancelation of the key meeting seems to overshadow the US' role in the mediation process.

Earlier this month, differences emerged between the US envoy Grenell and European officials on who has to take the leading role in talks between the two foes.

Grenell rejected media speculation, saying that the Washington meeting would be only focused on the economic cooperation but the EU will keep the political role.

“The US is focused on the economy. The political issues are European issues that come second,” Grenell said in an interview with Gazeta Express earlier this month.

However, there was no indication that the EU and the US have been coordinating their efforts in the process of helping Serbia and Kosovo to reach a permanent agreement.

EU spokesman Peter Stano said the EU has been facilitating the dialogue between Belgrade and Pristina from the start in 2011 and would continue to keep that leading role.

Thaci was clear that he favoured Washington’s leadership role in the talks. He and other Kosovan politicians stood openly against the EU’s newly appointed envoy for Kosovo and Serbia, Miroslav Lajcak, because he comes from Slovakia, a country that does not recognise Kosovo as a state.

Vucic said that while he accepted the invitation for talks in Washington that does not mean that the talks would undermine the EU mediation efforts.

Now, the talks are cancelled it seems that the EU has won the battle to assume leading role in the mediation process by default, while the indictment against Thaci seems to have boosted the Serbian position. This concided with Vucic retaining power in a recent snap general election that gave his Serbian Progressive Party an overwhelming majority in the parliament in Belgrade.

The indictment said Thaci, Veseli and others are suspected of being responsible for nearly 100 murders of Kosovo Albanians, Serbs and Roma including their political opponents. The indictment includes crimes against humanity and war crimes, including murder, disappearance of persons, torture and persecution.

The Specialist Prosecutor also said that the indictment was filed in April, but has been revealed now because Thaci and Veseli tried to undermine the work of the KSC and carried out a secret campaign to overturn the law creating the court in an attempt to avoid trials.

In December 2017, Veseli’s Democratic Party tried to revoke the court’s mandate in Kosovo’s parliament, but was obstructed by the opposition.

Kosovo unilaterally declared independence from Serbia in 2008, but it is still not recognised by Belgrade as a separate country. The proclamation of independence came following the Kosovo war in 1998-1999 which ended with Nato attacks in Serbia. The independence war claimed more than 10,000 victims.

The indictment, which came as a shock for Kosovo and the region, has not yet been accepted by the pre-trial judge.

Kosovan politicians from across political parties reacted to the Specialist Prosecutor office's decision, saying that the KLA’s fight against Serbia was necessary and that Thaci and others accused by the Hague court are innocent.

However, political analyst Ramush Tahiri and law professor Mazllum Baraliu told media that Thaci must resign as a moral act after the indictment was filed against him.

The fact that the indictment was planned for several years but the sudden publication right now, just before the planned meeting in Washington, certainly has a political connotation and background, according to some analysts.

"Whether the goal of the indictment is to speed up the dialogue and whether it is possible to continue, is still not clear," analyst Djordje Vukadinovic was cited by media. He also said that Thaci must resign as former Haradinaj did in July, when he was summoned for questioning by the Hague-based court.

Kosovan publicist and former journalist Veton Surroi assessed that the indictments of the Special Prosecutor's Office against Thaci, Veseli and other politicians for war crimes are the beginning of liberation from the capture of Kosovo by those who have been running politics and institutions for 20 years.

“A dramatic beginning of disentanglement of state capture,” he wrote in a tweet.

Thaci has not yet commented on the indictment, but indirectly said that he was proud of his participation in the KLA by publishing the emblem of this military formation in a Facebook post.