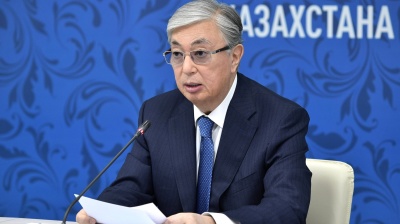 Tokayev is yet to convince Kazakhstan that his reforms amount to anything much.
By Nizom Khodjayev in Bishkek September 3, 2020

Kazakhstan's government has announced that officials and members of their families are to be prohibited from holding bank accounts abroad.

The announcement made by finance minister Erulan Zhamaubayev linked the move to the finance ministry’s programme to combat the shadow economy and enhance the development of financial regulation.

There is growing public frustration in Kazakhstan over corruption. Several overseas scandals have brought into focus the Kazakh elite’s unexplained offshore wealth. The ban on foreign bank accounts is, however, unlikely to prevent top Kazakh cliques from holding their funds offshore, since much of it is not held in their own names.

Zhamaubayev said that all bank accounts in Kazakhstan would be monitored in line with an Organisation for Economic Cooperation and Development (OECD) programme under which member states share information with each other. The OECD is a 37-member group of countries with market economies. It cooperates with over 70 non-member economies as part of a drive to promote sustainable development and economic growth.

Zhamaubayev made no mention of when exactly the ban would be implemented. He also did not clarify what the consequences would be if the authorities discovered offshore accounts belonging to officials or their family members.

The announcement followed Kazakh President Kassym-Zhomart Tokayev’s second state of the nation address. In the address, among other things, Tokayev mentioned that to prevent corruption it would be necessary to bar government officials, lawmakers and judges from having bank accounts abroad as of 2021.

Tokayev—under growing pressure amid his country’s challenging coronavirus (COVID-19) outbreak given the widely held view in Kazakh society that the government has failed to carry out sufficient economic and democratic reforms—called on September 1 for a "reset" of Kazakhstan’s state structures.

The president announced that a new state body called the Agency for Strategic Planning and Reforms would soon be boosting "necessary reforms," while another state agency would be launched to support economic competition. Both agencies are to report directly to Tokayev.

One change will be direct local elections for governors in villages from 2021. Opposition groups have long demanded such elections be put in place across the country.

The government is also to separate the Agency for Emergency Situations from the Interior Ministry in order to allow it to have looser hands in responding to the coronavirus pandemic. Citizens are continuing to demand more compensation for losses caused to them by the outbreak.

The proposed changes come with the economy suffering a huge blow from the double whammy of low oil prices and the pandemic as well as measures taken to prevent the spread of COVID-19. The economy is expected to shrink by at least 0.9% in 2020.

Kazakhstan headhunts Belarusian IT developers, in vain so far

Disasters in the making
Kazakhstan headhunts Belarusian IT developers, in vain so far
COMMENT: How Covid-19 is changing international business and politics