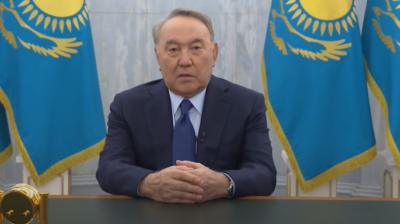 Nazarbayev seen in the video address released on social media.
By Nizom Khodjayev in Nur-Sultan January 18, 2022

Kazakhstan’s former president Nursultan Nazarbayev on January 18 appeared for the first time since unrest plunged the country into turmoil at the start of the new year.

Heavy speculation that the 81-year-old was dead emerged as authorities refused to confirm or deny whether he was alive, while at the same time the Tokayev administration proceeded with an apparent purge of members of the Nazarbayev clan from positions in power and business.

Nazarbayev gave an address in a four-minute-long video (here and below), apparently shot in the capital Nur-Sultan, released on social media.

The ex-president, who ruled for nearly three decades from 1990 to 2019 before handing over to Kassym-Jomart Tokayev, and who has the honorific title of “Elbasy”, or “Leader of the Nation”, referred to himself as a “pensioner” and said in the video: "The January events shocked the whole of Kazakhstan."

He added: "The goal ... was to destroy the integrity of the country and the foundations of the state."

Describing the unrest as a “tragedy”, Nazarbayev expressed condolences to families of the victims and urged the authorities to find out "who organised all these demonstrations and murders".

The death toll from the unrest officially stands at 225, with 19 fatalities among the security forces. At one point, Tokayev issued a shoot-to-kill order in his clampdown and invited in Russian troops.

Nazarbayev, who was abruptly dismissed from his post as head of the national security council as Tokayev sought to end the mayhem and assert his authority, also addressed the question of his prolonged absence from public view by claiming that he did not consider it necessary to interfere in the situation or even appear in public as the presidency was handed to successor Tokayev in 2019.

But prior to recent events, Kazakhs widely viewed Nazarbayev as exercising commanding power from behind the scenes despite his official retirement from the presidency. Many analysts saw Tokayev as simply his handpicked placeman but by stripping the security council post away from Nazarbayev in the way he did, Tokayev was able to quell some of the anger being expressed on the street—to very many among the crowds, Nazarbayev remained the main target for their frustration at the perceived establishment corruption and social injustice seen in the country given that these things arose under his long reign—and indicate that a true post-Nazarbayev era was now arriving.

Observers said the fact that Tokayev relied on troops from Russia—and from other members of the post-Soviet Collective Security Treaty Organization, or CSTO—to complete his crackdown on the unrest suggested, however, that he was not confident that the law enforcement and military would back his assertion of power.

"I am on a well-deserved rest in the capital of Kazakhstan and have not left for anywhere," Nazarbayev added in the video address, dismissing rumours that he had left the country.

Nazarbayev also tried to refute the rumours about an ongoing conflict among the Kazakh elite. He said that Tokayev "possesses full powers" and that his predecessor would soon be elected chairperson of the ruling Nur Otan (Radiant Fatherland) party.

"There is no conflict or confrontation within the elite," he said. "Rumours about this are completely unfounded."

Conflict or not, Tokayev has already called on the members of the elite that emerged under Nazarbayev’s patronage to share their wealth with the rest of the country, while he has arrested Nazarbayev’s former close ally Karim Masimov, the former head of the security service who is now under investigation for high treason, and appears to have targeted assets belonging to Nazarbayev’s family.

Nazarbayev’s nephew, Samat Abish, was sacked from his position as second-in-command at the National Security Committee (KNB) on the same day.

At the end of his speech, Nazarbayev recalled that "for 30 years, I have been working tirelessly for the sake of our motherland".

“We strengthened its borders. We carried out progressive reforms. Together we built an independent Kazakhstan, achieved great results in socio-economic development, became leaders in many respects, not only in Central Asia, but also in the CIS,” he continued.