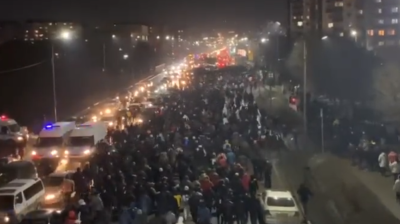 Thousands took to the streets in Almaty, with protests continuing far into the evening. / Screengrab, social media.
By bne IntelIiNews January 4, 2022

Kazakhstan was on January 4 gripped by a nationwide wave of protests ostensibly triggered by a sudden fuel price rise but in many instances quickly turning into general anti-government unrest on the streets.

The authorities will on January 5 be hoping that concessions made by officials and the use of special powers will be enough to stop the protests building and spreading. In commercial capital and largest Kazakh city Almaty, the unrest involved thousands of demonstrators who clashed with riot police deploying tear gas and stun grenades, according to Reuters and AFP reports.

President Kassym-Jomart Tokayev on the evening of January 4 declared a state of emergency that will apply to Almaty and Mangystau region, the region where the first protests took place. He added that the government would meet on January 5 to discuss “the socio-economic demands” of protesters. The difficulties in Kazakhstan could be a headache for the Kremlin, with its Central Asian "backyard" already troubled by the unstable situation in Afghanistan and unresolved tensions between Tajikistan and Kyrgyzstan, which clashed militarily last year. There were reports that Moscow had sent security council secretary Nikolai Patrushev to consult with the Kazakh regime.

Journalists in Almaty reported hearing the blasts of stun grenades as crowds moved toward Republic Square. Live video streams from the square late in the evening showed the entire area enveloped in thick smoke, Eurasianet reported. A Reuters correspondent on the scene reported that the tear gas and stun grenades were used to stop hundreds of demonstrators from storming the mayor’s office. Almaty-based news website Zakon.kz reported that several police cars had been set alight and that some demonstrators were smashing the windows of stores and restaurants.

Internet connections in parts of Almaty were periodically down. Users of messengers like WhatsApp and Telegram reported difficulties in getting the apps to function. RFE/RL reported the arrest of two of its journalists covering the protests.

Tokayev delivered a televised address, calling on protestors to refrain from causing unrest.

“Do not succumb to provocations from within and outside the country,” he said. “Exhortations to attack civilian and military facilities are absolutely unlawful. This is a crime that will be punished. The authorities will not fall, and we do not need conflict, but rather mutual trust and dialogue.”

Tokayev’s office said in a statement released several hours later that the state of emergency imposed on Almaty and the Mangystau region, where the first protests took place, would take immediate effect and remain in place until January 19.

The oil-rich country's government announced late on January 4 that it was restoring some price caps on liquefied petroleum gas (LPG). Many Kazakhs have converted their cars to run on LPG, which is much less costly than gasoline as a vehicle fuel in the country because of the price caps. When lifting the caps on January 1, the government argued that the low price was unsustainable.

The first rallies in the chain of protests reportedly took place on January 2 in the western oil town of Zhanaozen, with a sudden spike in the price of car fuel causing fury. Gatherings then quickly sprung up in nearby villages in surrounding Mangystau region and then in other locations in the west, in cities like Aktau, Atyrau and Aktobe, according to local reports. By January 4, people had come out onto the streets in numbers in locations many hundreds of kilometres away, in the southern towns of Taraz, Shymkent and Kyzyl-Orda, in the north, in the cities of Uralsk and Kostanai, as well as in Almaty and Nur-Sultan, the capital, among other places, Eurasianet also wrote.

Big public protests are rare in Kazakhstan. Street protests are illegal unless their organisers file an advance notice.

In Zhanaozen, dozens of people were killed in protests in 2011 that took place after the sacking of oil workers who were calling for better pay and working conditions.

Tokayev is the handpicked successor of Nursultan Nazarbayev, a Soviet-era Communist boss who went on to become Kazakhstan’s first leader after independence and ruled for nearly three decades until he stepped down in 2019. The 81-year-old is said to still command enormous power behind the scenes. Under Nazarbayev, a small elite amassed enormous wealth. Though the country has immense oil-generated riches, the many Kazakhs who struggle to make ends meet typically assert that they have not been distributed equitably.

Manshuk Ergaliyeva, the director of a household goods store in downtown Almaty, recently told Eurasianet in an interview: “We could have lived as well as the people of Dubai thanks to oil revenues, if only they hadn’t been plundered.”

Kazakhstan’s political system is fully controlled by the government. Only the ruling party, Nur Otan (Radiant Fatherland) and a handful of loyal puppet parties are officially registered.

As part of his efforts to ease social tensions, Tokayev formed a consensus-building forum called the National Council of Public Confidence. However, the initiative has been roundly dismissed as window-dressing.