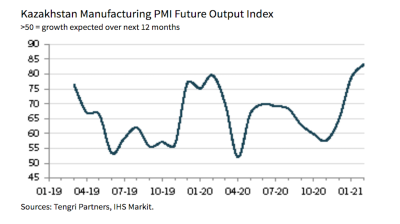 Deteriorating operating conditions across the Kazakh manufacturing sector continued in February, according to the latest Tengri Partners Kazakhstan Manufacturing Purchasing Managers’ Index (PMI). The index posted 48.5 in February, up from 45.6 in January, the PMI survey report released by IHS Markit showed on March 1.

Anything above 50.0 signifies an overall expansion and anything below 50.0 represents a deterioration. “The easing rate of decline was helped in part by a renewed increase in new orders, amid reports of improved client demand in some sub-sectors. The upturn in order book volumes was marginal overall.” it said.

“Supply issues continued to impact lead times and push up costs, with input price inflation among the fastest on record. Goods producers were able to offset this rise by passing some of the burden onto clients, however, with the latest increase in factory gate charges the steepest on record,” he added. "Although a step in the right direction, the sector remains stuck in a downturn. If the improvement in client demand can be sustained we should see movement towards a recovery."

Kazakh goods producers reduced their purchasing activity further in February — panellists attributed the latest decline to lower production requirements. The rate of decline registered as the quickest since April last year. Pre-production inventories fell for the eighteenth straight month, with the rate of contraction remaining sharp, despite easing. Holdings of finished goods also declined, as reports showed that orders were being fulfilled with inventories where possible.

“Ongoing coronavirus disease 2019 (COVID-19) restrictions continued to create logistical issues during February, according to anecdotal evidence,” the report said. “Lead times for inputs lengthened further, although delays were much less severe than in the previous month. Nonetheless, shortages and price hikes at suppliers pushed input costs up again in February. The rate of cost inflation slowed only slightly and was still among the quickest on record. As a result, manufactures increased their factory gate charges at the steepest rate since data collection began in March 2019.”