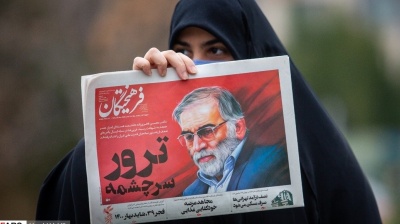 A student protester outside Shahid Beheshti University in Tehran holds up a newspaper with an image of assassinated nuclear scientist Mohsen Fakhrizadeh.
By bne IntelIiNews November 28, 2020

State prosecutors in Iran have placed Donald Trump at the top of a list of 36 individuals identified in relation to the assassination of the Islamic Republic’s top general, Qasem Soleimani, and have pledged to pursue the US president even after his term in office ends in January, the Tehran Times reported on November 27.

The report came on the same day that a hit squad—which top Iranian officials claim was almost certainly deployed by Israel—assassinated Iran’s top nuclear scientist Mohsen Fakhrizadeh in a covert operation in a town 40 miles east of Tehran. Responding to the killing, Iran’s Supreme Leader Ayatollah Ali Khamenei said on November 28 that Iran’s immediate priority was the “definitive punishment of the perpetrators and those who ordered it”. He did not elaborate.

Referring to the January killing of Soleimani—in a US drone strike at Baghdad airport personally authorised by Trump and described by a UN special rapporteur as a breach of international law—Tehran prosecutor general Ali Alqasi-Mehr reportedly said: “Thirty six individuals who cooperated, collaborated and participated in the assassination of Hajj Qasem, including political and military authorities of the US and other countries, have been identified.”

The Tehran Times quoted prosecutors as saying that the Iranian judiciary has formed a committee to track down those who were behind the killing of Soleimani, who was the de facto head of Iran’s armed forces and the country’s second most important official.

Tehran deputy prosecutor general Seyyed Ashrafi was cited as saying by IRNA news agency that Iran provided Interpol with the names of 45 American nationals involved in the killing of Soleimani, but Interpol refused to issue international arrest warrants for them because of the current political situation. IRNA’s report did not specify what situation Ashrafi was referring to. Some of the American nationals regularly visited countries neighbouring Iran, Ashrafi reportedly said, adding that Iran has sent judicial representation to six of those countries, where American bases are located.

“We were recently informed that the Iraqi government has prepared a response to this representation, and is submitting it through diplomatic channels,” Ashrafi was quoted as stating, also saying that Iran was preparing a judicial representation addressed to the US judicial system to test for an outcome and ascertain whether the US would prosecute the accused.

In September, Iranian Revolutionary Guard Corps (IRGC) head, Major General Hossein Salami, said the US should know that Iran will target whomever had a role in the assassination of Soleimani. “This is a serious message,” he warned. “These threats are serious and we’re not engaging in a war of words. Rather, we’ll leave everything to the field of action.”

‘No impunity for Trump’

Iranian Foreign Ministry spokesman Saeed Khatibzadeh has previously said that Iran will spare no efforts in bringing those behind the assassination of Soleimani to justice and that Trump cannot enjoy presidential impunity after his presidential administration ends.

“I repeat that we do not believe the perpetrators of this crime, especially Trump as the main perpetrator, can be exempted from legal prosecution, in a way that is in line with international law, by taking refuge behind the wall of immunity,” he added.

In further remarks on the assassination of Fakhrizadeh, Iranian President Hassan Rouhani on November 28 blamed Israel and reiterated that Fakhrizadeh’s death would not halt the country’s nuclear development programme, which Iran claims is non-military and focused on energy.

“We will respond to the assassination of Martyr Fakhrizadeh in a proper time,” Rouhani said, indicating it could be days or weeks before a retalitation.

Iran has told the UN secretary general, Antonio Guterres and the UN security council in a letter that there were “serious indications of Israeli responsibility” for the assassination and that it reserved the right to “take all necessary measures to defend its people”.

A spokesperson for Josep Borrell, the EU’s foreign policy chief, described the attack as a “criminal act” and called for “all parties to remain calm and exercise maximum restraint”.

John Brennan, a former head of the CIA under Trump’s predecessor as US president Barack Obama, called the assassination “a criminal act and highly reckless”. “Iranian leaders would be wise to wait for the return of responsible American leadership on the global stage and to resist the urge to respond against perceived culprits,” he tweeted.

If Iran hits back over the Fakhrizadeh assassination, US President-elect Joe Biden’s hopes of engaging Tehran with diplomacy and calming Middle East tensions could be wrecked.

A retaliation could also give Trump an excuse to hit Iran with overt or covert military action in a move to secure a foreign policy win before his term of power is up. His policy of attempting to diminish Iran as a force in the Middle East with crushing sanctions is widely seen as having failed given that it has hurt ordinary Iranians while leaving the ruling regime intact and untouched.