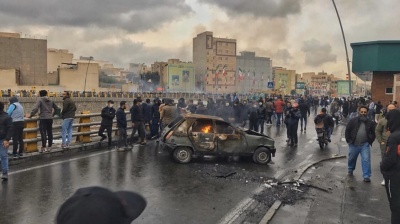 Thousands of Iranians took to the streets to protest against an overnight jacking up of petrol prices by 50%.
By bne IntelliNews November 17, 2019

Iran went under virtual martial law as the authorities essentially shut down the internet and  the roads in the capital. There were somne reports of shooting on the streets of Tehran as the situation became increasingly tense.

"I heard people banging on our gate begging to be hidden from the police, while I heard gunfire in the background on the street," one eyewitness in southern Tehran told bne IntelliNews.

The capital was on lockdown with roadblocks across the city as authorities conducted an operation to arrest those it claimed were the protest movement ring leaders. 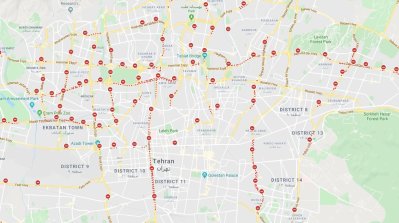 Maps of central Tehran posted on social media showed most of the centre of the city as closed down by police.

Violence flared over the weekend as the authorities suddenly hiked petrol prices by a minimum 50% over the weekend. Under the new fuel measures, each motorist that presents their ‘petrol card’ is allowed to buy 60 litres (13 gallons) of petrol a month at 15,000 rials ($0.13) a litre. Each additional litre then costs 30,000 rials. Previously, drivers were allowed up to 250 litres at 10,000 rials per litre.

There were unconfirmed reports of killings from across the country, but from the information available on the extent and nature of the trouble bne IntelliNews doesn't expect there to be a general uprising or insurrection at this point.

By the end of November 17, it became clear that Iran’s leaders were doubling down on backing the petrol price increase as a means of raising around $2.5bn per year in funds to distribute to Iranians on lower incomes suffering amid the economic turmoil wrought by the crushing sanctions directed at Iran by the US; that the proposal was recommended by the IMF; that the government was expected to rush forward scheduled ‘subsistence help’ for each Iranian to help quell the anger; and that government officials were claiming that around 90,000 people had to date been arrested in the trouble.

Iran’s Supreme Leader Ayatollah Ali Khamenei condemned the protesters across the country, calling them “thugs” and “hooligans”, and accused opponents of the Islamic Republic of “sabotage”, state media reported on November 17.

“Some people are no doubt worried by this decision ... but sabotage and arson is done by hooligans, not our people. The counter-revolution and Iran’s enemies have always supported sabotage and breaches of security and continue to do so,” Press TV reported him as saying.

"Unfortunately, some problems were caused, a number of people lost their lives and some centres were destroyed," Khamenei said.

Paramilitary and police have descended on several Iranian cities in the past 48 hours as people across the country protested against the sudden rise in the cost of petrol, which many Iranians feel should be kept at rock-bottom prices giving the country’s oil wealth. Despite the anger, even after the price hike, Iran's petrol remains among the cheapest in the world.

Demonstrators targeted the state-owned banks and video footage shared on social media showed one such bank going up in flames with demonstrators celebrating in front of the blaze. 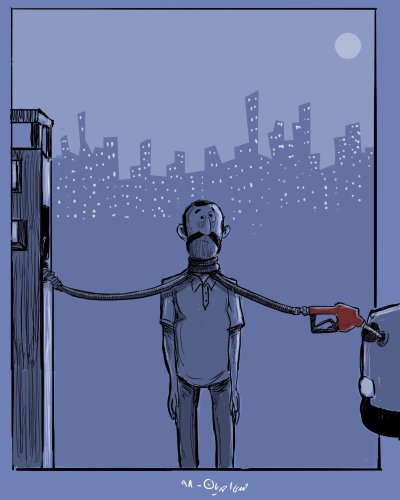 bneGREEN: G7 could set green example for rest of world
Nearly everyone in Iran infected by coronavirus at some point concludes study
UK ‘tells trapped Afghan interpreters to escape on their own’