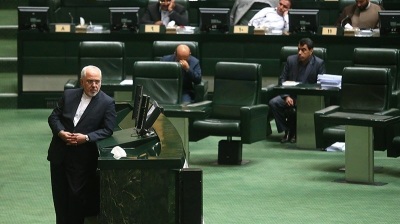 Zarif (pictured) and Pompeo have entered into another war of words.
By bne IntelliNews September 15, 2019

Iran’s foreign minister on September 15 hit out at US counterpart Mike Pompeo after Washington claimed Tehran was behind the drone attacks that damaged two Saudi oil facilities at the weekend.

Referring to the US sanctions-led campaign to strangle Iran’s economy, he said on Twitter: “Having failed at max pressure, Sec Pompeo's turning to max deceit".

In the wake of the attacks, hardline elements in Iran—who want to see pragmatic centrists like Zarif stay tough in the face of the Trump administration’s “economic war”—warned the US that if it moved for a military confrontation with the Islamic Republic, the Iranians would be prepared. A senior commander from Iran’s Islamic Revolutionary Guard Corps (IRGC) said Iran was ready for “full-fledged” war.

“Everybody should know that all American bases and their aircraft carriers in a distance of up to 2,000km around Iran are within the range of our missiles,” the head of the IRGC aerospace force, Amirali Hajizadeh, was quoted as saying by the semi-official Tasnim news agency.

Saudi Arabia is a staunch supporter of the US sanctions campaign being waged against Iran, including its move since May to try and drive all Iranian oil exports off world markets. There is some anger in Tehran that the Saudis have moved to take over oil market segments that the US has successfully pushed Iran out of by threatening buyers with secondary sanctions.

Pompeo rejected claims by Yemen's Iran-backed Houthi rebels that they were behind the attacks, using 10 drones that targeted the Abqaiq processing plant and the Khurais oilfield.

Pompeo said there was "no evidence" the drones came from Yemen and instead accused Iran. He added: “Iran has now launched an unprecedented attack on the world’s energy supply.”

The attacks early on September 14 knocked out the production of 5.7mn barrels of oil a day according to the Saudis. That's equivalent to around 5% of the world's daily oil production.

Earlier this year, after several limpet mine attacks on oil tankers in the Sea of Oman that disabled the vessels, the US also accused Iran. But it did not present any conclusive evidence.

Zarif said the US and its allies were "stuck in Yemen because of the illusion that weapon superiority will lead to military victory".

"What is happening in the region today, which has also worried the world, is in fact because of the wrong policies adopted by the US and the plots hatched by the country," he said.

Giving no evidence to back up his claims of Iran’s culpability for the drone attacks, Pompeo said: "We call on all nations to publicly and unequivocally condemn Iran's attacks."

The US would work with its allies to ensure "Iran is held accountable for its aggression", he added.

Observers have noted that the drones usually used by the Houthis would not have the range to fly from Yemen to the location of the attacks in Saudi Arabia, but UN investigators have lately highlighted the existence of a new Houthi drone, the UAV-X, which could reach up to 1,500km.

Assessing the value of the attacked oil facilities, Robert McNally, of US-based Rapidan Energy Group, said: “Abqaiq is perhaps the most critical facility in the world for oil supply. Oil prices will jump on this. If disruption to production is prolonged, a Strategic Petrol Reserves release from International Energy Agency (IEA) members seems both likely and sensible. If anything, the risk of tit-for-tat regional escalation, which pushes oil prices even higher, has just gone up significantly.”