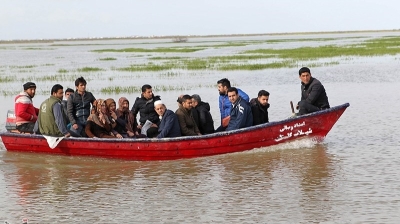 The flooding is the worst seen in Iran for at least 50 years.
By bne IntelliNews April 15, 2019

Lawmakers gave that figure to state media on April 15, pointing to the extent of damage to roads, bridges, homes and agricultural land, among other impacts. Some estimates in circulation quoted by local media outlets suggest another IRR175 trillion may soon be added to the bill.

The flooding began on March 19 as Iran prepared to enter its long Nowruz Persian new year holidays. Some 76 people are known to have lost their lives in the deluge, the worst for at least 50 years. More than 220,000 people, meanwhile, have been forced into emergency shelters.

“The recent floods are unprecedented... 25 provinces and more than 4,400 villages have been affected,” Interior Minister Abdolreza Rahmani Fazli was quoted as saying in parliament by state news agency IRNA.

Minister of Roads and Urban Development Mohammad Eslami said 14,000 kilometres (8,700 miles) of road had been damaged. Additionally, more than 700 bridges were entirely wrecked by landslides and flood water, he said.

The government has said it will pay compensation to all those who have incurred losses, especially farmers. However, Iran’s state budget is already under strain given the US sanctions aimed at strangling the Iranian economy.

Morteza Shahidzadeh, head of Iran’s sovereign wealth fund, said President Hassan Rouhani had asked permission from the Supreme Leader Ayatollah Ali Khamenei to withdraw $2bn from the fund for reconstruction in flood-hit areas, Reuters reported. He added that Khamenei has in principle agreed to the request.

It’s election day in Iran and the situation could hardly be more confused. Until the fatal ... more

Two Iranians with coronavirus die in holy city of Qom, a magnet for pious Shi’ite Muslims from around world

Two Iranian men infected with the new coronavirus (officially the COVID-19 virus) have "died of respiratory illness" in a hospital in the holy Shi'ite city of Qom, head of the city's University of ... more

The US Senate on February 13 passed a bill to curtail President Donald Trump's ability to wage war on Iran without congressional approval. The Iran war powers resolution was approved by a vote of ... more