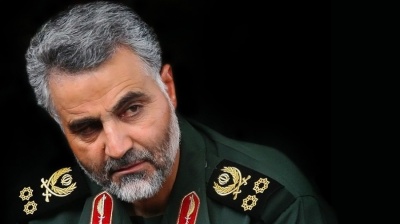 Qasem Soleimani was killed by a US drone strike in the vicinity of Baghdad Airport in January 2020. / sayyed shahab-o-din vajedi.
By bne IntelIiNews April 21, 2022

Iran has no plans to abandon its intention to avenge the US assassination more than two years ago of top Iranian general Qasem Soleimani despite "regular offers" from Washington to lift sanctions and provide other concessions should it do so, an Iranian navy commander said on April 21.

"The enemy keeps sending messages that if we give up on avenging Soleimani, they will give us some concessions or lift some sanctions," Islamic Revolutionary Guard Corps (IRGC) Navy Commander Alireza Tangsiri said. "This is pure fantasy. The Supreme Leader has emphasised the need for revenge and the Revolutionary Guards' top commander has said that revenge is inevitable and that we will choose the time and place for it."

When the drone-strike assassination in the vicinity of Baghdad Airport took place on the order of then US president Donald Trump two years ago, there was shock among some legal experts that in killing Soleimani—who was regarded as the second most powerful official in Iran and was seen as a national hero by many Iranians—the US had, in their eyes, crossed a red line with a clear breach of international law. Prior to the hit on Soleimani, Trump had already gone after the IRGC by designating the elite corps as a foreign terrorist organisation (FTO). This move too drew surprise as never before had Washington designated part of the armed forces of a sovereign nation in this way. And, as things have turned out, the designation has proved to be a poison pill in the efforts of current US President Joe Biden and his officials aimed at resurrecting the 2015 nuclear deal, or JCPOA—the agreement that was drawn up to verifiably ensure that Iran’s nuclear programme remains entirely civilian in return for the lifting of economic sanctions.

While Iran, the US and five other major powers—France, Germany, the UK, China and Russia—appeared on the verge of finding a path to relaunching the JCPOA in March, talks in Vienna got bogged down on Iran’s demand that the US drop the IRGC, including its expeditionary Quds Force that Soleimani commanded, from its FTO list.

If Biden is at all willing to compromise on the FTO listing of the IRGC, he is yet to show that is the case. Clearly there would be a big political cost in making such a move in relation to a military entity that supports US foes such as Hezbollah in Lebanon.

On April 21, The Intercept published an article headlined “Joe Biden Deserves the Blame for Killing the Iran Nuclear Deal”. Author Murtaza Hussein contends: “To make sure the Iran deal wasn’t revived, Donald Trump introduced a poison pill—but Biden is the one demanding Iran swallow it.”

As Hussein points out, the IRGC is far more than just a military organisation in Iran. It has a massive presence in the economy. Quite apart from the fact that the continued FTO designation of the Guard wounds the pride of a nation that does not wish to see a major part of its military listed in such a fashion, the sanction could cause economic problems ahead, even should the JCPOA be reinstated.

Hussein quotes Hooman Majd, author of “The Ministry of Guidance Invites You to Not Stay, as saying: “When other sanctions were placed on Iran in the 1990s, the IRGC became the de facto engineering arm of the Iranian government. Everything down to the international airport in Tehran is run by the IRGC, and every aspect of business in Iran has some connection to the IRGC or former members of the IRGC. If the IRGC is listed as a terrorist organisation, is Boeing going to sell them planes?”

According to Reuters, asked about the Iranian comments on avenging Soleimani, a US State Department spokesperson said that if Iran wanted sanctions relief beyond the nuclear deal, it must address US concerns beyond the pact. However, the news agency reported that the spokesperson did not specify what they meant, though appeared to be alluding to Tehran's demand that Washington drop the IRGC from its FTO list.

"Iran needs to make a decision," the spokesperson added.

Tug of war emerging over what role Iran (and its oil) should play in new world order
bneGREEN: Iran records one of the hottest days on Earth ever
Nuclear deal dealt possible death blow as Iran yanks UN cameras