INTERVIEW: Vezet is Russia's second largest taxi service battling it out in a cutthroat market 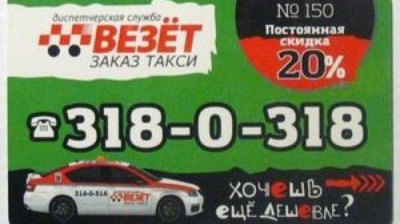 Vezet is strong in Russia's hinterland where it concentrates on price and quality service to hold its own / wiki
By Ben Aris in Berlin February 4, 2019

Russia’s taxi business has become ultra-competitive. Already running for several years, the incumbent Yandex.Taxi subsidies its drivers and won’t go into profit until maybe this year. It has already forced Uber into a merger and may IPO in the next two years.

In this shark tank the gypsy cabs have all but disappeared as it is cheaper to take an official cab, but there is room in the market for several players. Vezet is Russia’s second largest taxi aggregator and grew up in regions on the wrong side of the Ural mountains.

In an exclusive interview with bne IntelliNews, Vezet’s development office Ilya O’Guy explains the ins and outs of Russian a taxi service that is already expanding to the other countries of the Commonwealth of Independent States (CIS). With Russia’s biggest fund UFG Private Equity as a key shareholder, the company is looking at a potential IPO or sale in the coming years. The full interview is available on bne IntelliNews website as a podcast here.

bne: Can you give me some background as to where Vezet came from and what exactly you do?

IO: Vezet was founded in 1998 before Uber started in the US. It started as a phone order service for drivers in the regional cities and moved to an app business.

The company as it is today was formed in May 2017 when two large regional players merged, Saturn and RuTaxi, which were based in Krasnodar and Ufa respectively.

The company started as a phone in service and even today three quarters of the orders come as calls to the call centres, while  the remaining quarter arrive by apps – although of course that is growing.

The reason for this is the companies have been around a long time and they were promoting ordering taxi by telephone. And it works well as it only takes on average 21 seconds to place an order by phone.

There are also some limitations on the city level for the share of app orders in the regional cities, due to the number of smartphones, due to the development of the mobile network. That is not an obstacle in large Russian regional cities with more than 1mn inhabitants but it can affect the smaller cities. In Krasnodar or Ufa the penetration is not low, but some smaller cities with population below 1mn the penetration is lower. We operate across all Russia and Kazakhstan, Kyiv and Prague. In total we have more than 130 cities in operation.

bne: Russia is a huge market and the perfect place to develop a platform. Now the leading companies have the economies of scale someone like Yandex.Taxi recently announced it is moving into Finland and Israel. Are you planning the same?

IO: Yandex has wider coverage than we do in other countries and in Commonwealth of Independent States (CIS), but we better present in the Russian regions. We are well represented in the cities with one million and above, with Moscow as the exception. Its Yandex.Taxi’s home city and we launched in Moscow later than they did.

bne: Yandex is the incumbent and after its merger with Uber it has become even bigger. Does that leave you with anywhere to go?

IO:. This market is where the network effect means a lot; you have to have a certain market share to achieve the quality of service. Thus, we obviously feel this competition from them mainly because Yandex’s strategy of going into the market was by competing on price -- by subsidies mostly, hence misbalancing marketplace.

As taxi service at the moment is a commodity and price driven we have to compete on price as well in order to frow and protect our market share.

bne: Yandex is operating at loss and wont go into profit until this year. It's the Japanese model where you operate at a lost to grab market share in order to kill the competition.

IO: They achieved a lot in terms of killing the competition. That was done together with us and some other firms. Small taxi companies, niche players in a city, don't operate any more. The market is now mostly divided between about five players.

So how do we compete against Yandex? The first thing is the supply of cars – which means getting and keeping drivers. That is the main thing for us. Then there is cost. And finally it is strategies, like concentrating on the most popular routes, like trips to the airport. In some cities we try to be very competitive on those popular routes so people have an impression we are the price winner.

bne: Given it is a commoditised market sure the biggest company will win in the end?

IO: We don't think this is a winner takes all market. In the long run it will be a duopoly. We are the already the second largest player on the market in terms of number of rides – 40mn rides a month – so we are well placed to play this role.

In our model in almost every city where we are present we have our own office, which is responsible for the acquisition and retention of drivers. Drivers need attention. And they keep an eye on what they earn.

To stop churn we look at the three cohorts of drivers. One is a professional taxi driver, who spends 100% of his time at this profession. In this section the churn is low.

In the other two groups one is a part time worker. They use the taxi as an additional source of income and drive as a taxi on the way to work or on the way back home. This is the group with the highest churn.

The third group is in between and is the trickiest. They judge only by the money they make in each system and so they are the most competitive part.

bne: You are in most decent sized Russian cities, but how did you choose which other countries to go to?

Prague was a bit of a random choice to be honest, as one of the founders of the companies lives there. So it was a natural choice. We are expanding but we are taking it in stages.

bne: Isn’t going global key in any online business? As you say, you are offering a commodity so the bigger the scale the better.

IO: On one hand makes sense to go global and gain scale as you can use IT system you developed. However, in the taxi business the key is to be strong in the cities you operate in, to have significant market share in each city as every city is separate market.

bne: What next? You say that you think the busines will end in a duopoly, but you could sell to a strategic or maybe IPO?

IO: This is always an open question, especially as we have private equity investors in the company, who are always looking for exit. And the size of our companies would allow us to look at IPO in the near future too. This is definitely something under consideration.