ING: Russian corporates are back to foreign debt redemption in 2020 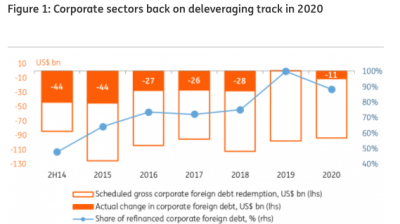 Russian corporates redeemed $11bn of foreign debt in 2020 and 89% of outstanding debt was refinanced
By Dmitry Dolgin chief economist Russia at ING in Moscow January 26, 2021

Russian corporates reduced foreign debt by $11bn in a tumultuous 2020 after a steady 2019. Still, with 89% of the debt refinanced, foreign debt redemption is not a material pressure factor for the ruble.

The large drop in non-debt foreign liabilities was more important, but this appears to be a one-off so far. Corporate sector has reduced foreign debt by $11bn in 2020 after keeping it flat in 2019.

The Bank of Russia released its first estimate of the foreign debt as of year-end 2020, which gives additional cover to the general balance of payments data we covered earlier.

In general, the numbers support our take, that the structure of the capital outflow changed last year. We have the following observations:

The persistent global uncertainties, low local investment demand, and sanction risks may force the corporate sector to resume moderate deleveraging this year; however, this trend is unlikely to put much pressure on the ruble as long as the FDI trend recovers. 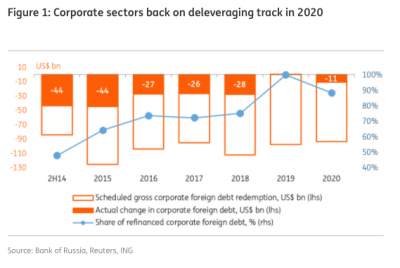 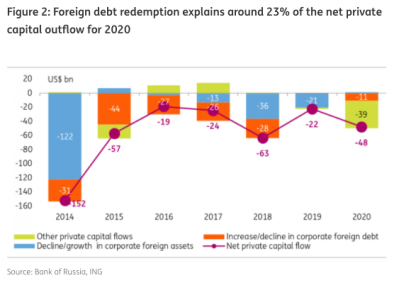 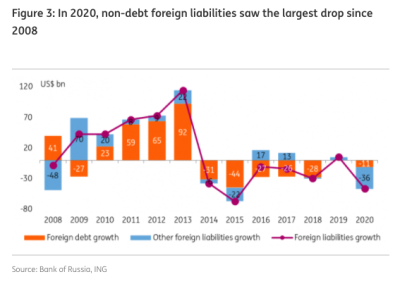 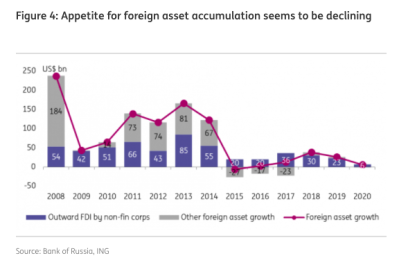 Dmitri Dolgin is the chief economist, Russia, at ING in Moscow. This note first appeared on ING’s “Think” portal here.

The news from Georgia over the past few days has been depressing. Headlines like, “Georgian opposition leader arrested” and, “opposition HQ stormed” evoke the sort of post-Soviet authoritarianism Georgia wants to put behind itself

Beijing is forcing China’s Mongolians to become Han Chinese. The Chinese Communist Party is suppressing their language, religion and culture.

There were many changes during 2020, but for Romanians it is quite clear that 2021 will not be a year of plenty.

Citizens and ruling elites of both countries are prepared to pay lip service to a shared dream but pause when confronted with the practical reality of its realisation.

OPINION: PM's resignation is a make-or-break moment for Georgia

What next in Georgia following the turmoil in recent days that has seen the PM quit, the leader of the opposition grabbed by security forces and Irakli Garibashvili, who is refusing to hold a snap election, made the new head of government?

COLCHIS: Georgia is in crisis, but it’s far from the end of democracy
7 hours ago
COMMENT: Why critics are asking if Inner Mongolia is the next Tibet or Xinjiang
7 hours ago
Romania: Demography, labour force and pandemic
2 days ago
VIENNEAST COMPASS: All in? Kosovo, Albania and the prospects of unification
2 days ago
OPINION: PM's resignation is a make-or-break moment for Georgia
2 days ago